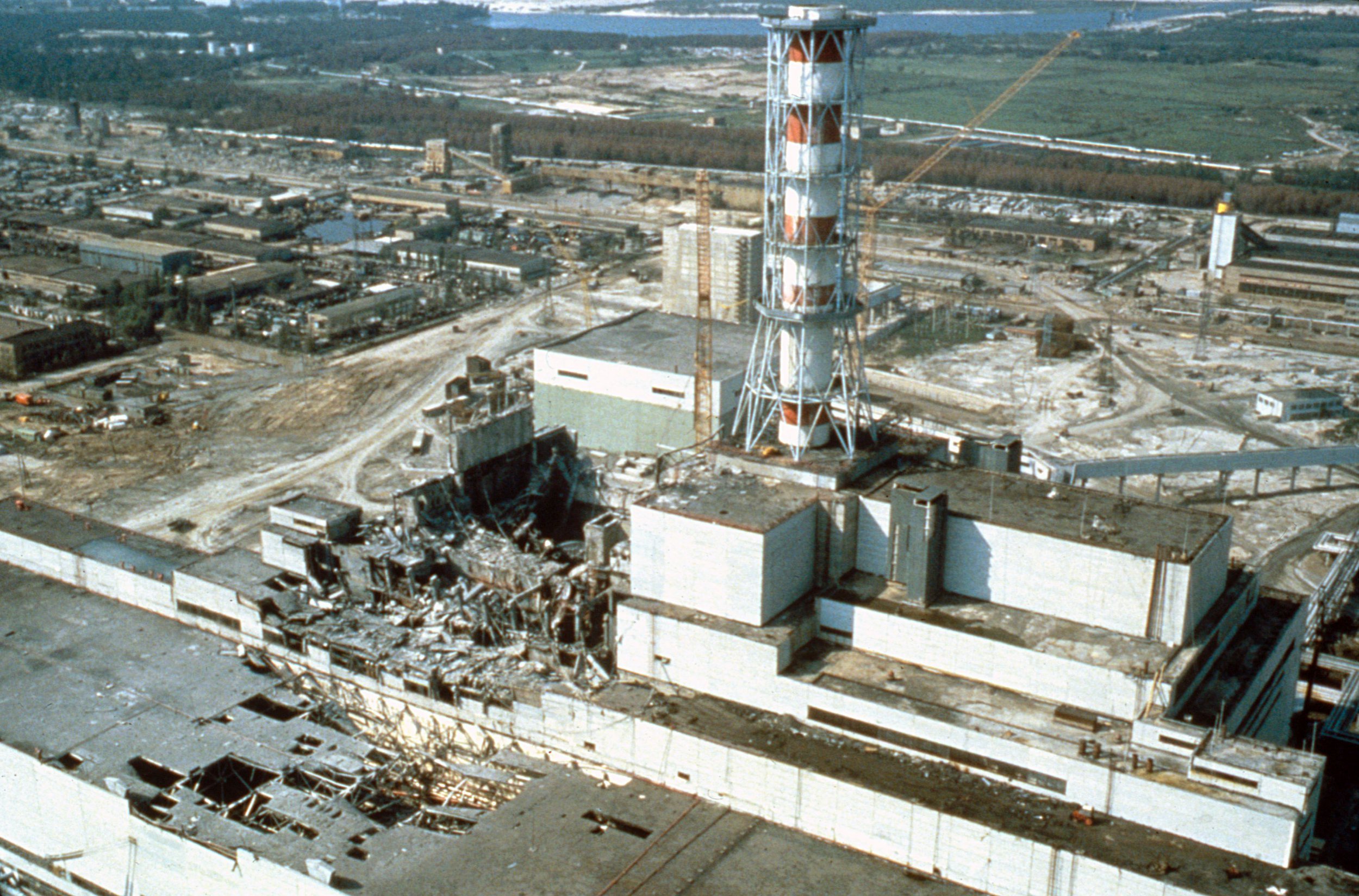 On April 26, 1986, a sudden surge of power during a reactor systems test destroyed Unit 4 of the nuclear power station at Chernobyl, Ukraine, in the former Soviet Union.  A nuclear meltdown in one of the reactors caused a fire that sent a plume of radioactive fallout that eventually spread all over Europe. You know how dangerous radioactive materials involved in a fire can be and what they had done to Chernobyl. Let’s find out all these in detail.

Radioactive materials are any material which contains unstable atoms that emit ionizing radiations as it decays. Radioactive atoms have too much energy. When they spontaneously release their excess energy, they are said to decay. After releasing all their excess energy, the atoms become stable and are no longer radioactive. This radiation can be emitted in the form of positively charged alpha particles, negatively charged beta particles, gamma rays, or x-rays. Radiation is energy given off in the form of rays and high-speed particles.

Fires involving radioactive materials can result in widespread contamination. Radioactive particles can be carried easily by smoke plumes, ventilation systems. Fire in radioactive material is hazardous, and we know that Nuclear Power Plants contain lots of radioactive material. Fire in a Nuclear Power Plant is dangerous as it will result in the release of numerous radiations which is very dangerous for the environment. Most of the radiation released from the failed nuclear reactor is from fission products iodine-131, cesium-134, and cesium-137. Iodine-131 has a relatively short half-life of eight days, but is rapidly ingested through the air and tends to localize in the thyroid gland. Caesium isotopes have longer half-lives (cesium-137 has a half-life of 30 years) and are a concern for years after their release into the environment. Such incidents happened in this world, and the major one was the Chernobyl Nuclear Power Plant Incident. Let’s discover what happened there, and the steps taken.

On April 26, 1986, the Chernobyl power plant located near the city of Pripyat in northern Ukraine became the site of the worst ever nuclear accident. A massive steam explosion destroyed the reactor hall of unit 4, and radioactive material was released, affecting large parts of Ukraine, Belarus and Russia, but also reaching western Europe. On the evening of April 25, 1986, a group of engineers, lacking knowledge in nuclear physics, planned an electrical-engineering experiment on reactor number 4. They thought of experimenting how long turbines would spin and supply power to the main circulating pumps following a loss of main electrical power supply.

Operators decided to conduct a safety test, which they have timed to coincide with a routine shutdown for maintenance. The test was to determine whether, in the event of power failure, the plant still-spinning turbines can produce enough electricity to keep coolant pumps running during the brief gap before the emergency generators kick in.

To conduct the test reactor number 4’s core cooling system was disabled to keep it from interacting with the test. The reactor had to be stabilized at about 700-1000 MW prior to shut down, but it fell to 5000 MW due to some operational phenomenon. Later the operator committed an error and caused the reactor to go into the near-shutdown state by inserting the reactor control rods, which resulted in the drop of power output to around 30 MW. This low power wasn’t adequate to make the test and will make the reactor unstable. They decided to extract the control rods to restore the power, which was the violation of safety rules due to the positive void co-efficiency of the reactor.  The positive void coefficient is the increasing number of reactivity in a reactor that changes into steam. Extraction of control rods made power to stabilize at 200 MW at which they carried out the test, but the reactors were highly unstable at the lower power level. Even though the engineers continued with the experiment and shut down the turbine engine to see if its inertial spinning would power the reactor’s water pumps, it did not adequately power the water pumps. Without the cooling water, the power level in the reactor surged.

The water pumps started pumping water at a slower rate and them together with the entry to the core of slightly warmer feed water, may have caused boiling (void formation) at the bottom of the core. The void formation, along with xenon burn out, might have increased the power level at the core. The power level was then increased to 530 MW and continued to rise. The fuel elements were ruptured and led to steam generation, which grew the positive void coefficient resulting in high power output.

The high power output alarmed the engineers who pressed the emergency shutdown button and tried to insert all the 200 control rods, which is a conventional procedure done to control the core temperature. But these rods got jammed half the way, because of their graphite tip design. So, before the control rods with their five-meter absorbent material could penetrate the core, 200 graphite tips simultaneously entered the core, which facilitated the reaction to increase.

This ended up in two explosions. The first explosion, to be quickly followed by at least one more, blows the 1,000-ton roof right off the reactor and shoots a fireball high into the night sky. A blackout roils the plant as the air fills with dust and graphite chunks, and radiation begins spewing out.

HOW FIRE WAS CONTROLLED??

The firefighters present didn’t have any clue about what they were handling. They believed that they were tackling an ordinary blaze and were wearing no protective clothing. They turned off Reactor 3  immediately followed by reactor 1 and 2. By the next morning, all the fire was extinguished except for a blaze in the reactor 4.

Soviet authorities spooked by the political fallout tried to cover up the scale of the disaster. They even denied any knowledge of the nuclear disaster after Sweden reported radioactive particles in its airspace.

After continuous pumping of radiations into the air, authorities realized that they had to stop.

The radiations coming out were getting dangerous and were needed to stop. Hence, they used Boron because of its property to absorb neutrons so it would effectively end the fire by neutralizing the uranium atoms shot about at random. With the help of helicopters, they dumped more than 5,000 metric tons of sand, clay and Boron onto the burning, exposed reactor no. 4.

The helicopters used to dump the load struggled as they were not allowed to fly directly above the open reactor. 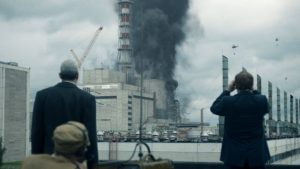 While the fire got suppressed, the authorities came up with a more significant problem of a nuclear meltdown due to overheating.

Half of Europe was in the danger of getting wiped out as the core was melted and was reacting with the groundwater underneath the plant, this would have caused a second, bigger explosion.

Three volunteer divers were sent into the depths of the power plant to open valves that would drain the water To prevent the second explosion. In this way, the big bang got restricted.

But 400 miners also had to be brought in to dig underneath the power plant and install a cooling system as the groundwater was still contaminated.

The heroes completed their work, knowing they were being exposed to radiation poisoning, in just six weeks despite a three-month project projection.

The efforts of all involved saved millions of lives.

WHY BORON AND SAND?

Exposing a burning nuclear core to the air is a problem on at least two levels.

First was an ongoing nuclear fission reaction. Uranium fires off neutrons which are slamming into other atoms and splitting them, releasing more energy yet and feeding the whole hot mess. The second problem was the presence of an assortment of types of relatively lightweight elements that form when uranium atoms split in the fire coming right out of a nuclear reactor which was very dangerous for the human body.

The sand was to smother the exposed reactor, squelching that deadly smoke plume.

Boron is one of the few elements to possess nuclear properties, which warrant its consideration as neutron absorber material. Due to its atomic structure, it’s sort of neutron-thirsty. So the plan was to dump enough boron on the exposed reactor, and it would absorb so many of those wildly firing neutrons that the reaction would stop.

In Chernobyl’s case, however, dumping the boron and other neutron absorbers onto the reactor turned out not to work as helicopters were not allowed to fly directly above the open nuclear reactor.

As the molten metal was present inside the reactor, it oxidises in contact with water, stripping oxygen from the water molecule and leaving free hydrogen. Hydrogen could mix with air and explode. That’s why divers were sent into the depth of the power plant to open valves which drains out the underground water.

WHAT WOULD WE DO TODAY?

The modern-day nuclear reactors are much less likely than Chernobyl to encounter any sort of disaster. They will never run as hot and operate in sturdier vessels. The buildings themselves are designed to do much of the work to squelch a nuclear reactor fire and a radioactive plume. Modern-day reactors are equipped with chemical sprays that can flood the reactor buildings and will take the isotopes out of the air before they can escape. Unlike the Chernobyl, nuclear facilities are entirely enclosed in sealed structures of cement and rebar. These structures are so strong that even the jet crash won’t affect them, and it wouldn’t expose the core.

Emergency handbooks are present for each nuclear power plant laying out information of what responders should do in the events of all sorts of somewhat- plausible to highly unlikely emergencies. As soon as the reactor fails to shut down normally, lots of boron is to be shovelled into the core.

The accident at the Chernobyl nuclear power plant in 1986 was a tragic event for its victims, and those most affected suffered significant hardship. The leading cause of the disaster was the technical flaws in the process of Steam Turbine Test and low safety measures taken during the test. Due to radiation emission from the reactor, several problems related to human beings and the environment. Dumping boron was a good idea, but they were not able to find a better way to drop it. Fighting a fire on an exposed uranium core will always come down to more or less fancy versions of dumping boron and sand.