So let’s begin an overview of discussion by first considering readers who heard word “game theory” for the first time. If I go with definition it goes like this : 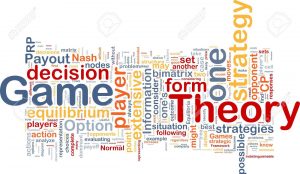 Game theory is the study of mathematical models of strategic interaction between rational decision-makers. It has applications in social science, logic making, computer science, etc. (Wikipedia) Formulated by a mathematician named John Nash. There is also one movie on him: “The Beautiful Mind”, a worth watching one.

Let’s analyze an event of cold war, the Cuban Missile Crisis, which was on verge of starting Nuclear War in the world – 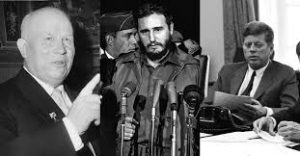 THE CUBAN MISSILE CRISIS: also called the October Crisis, this event took place in the year 1962, it was a 13 day long (October 16-28 ) face-off between the greatest superpowers the United States of America and the Soviet Union. The conflict’s chronological order was as follows :

So, if we obtain a payoff matrix for the situation, it will be like – 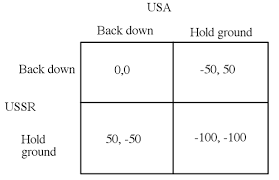 What finally happened was 0,0, thank god it wasn’t -100,-100, else Earth had been turned inhabitable. These type of solutions are called socially optimal solutions (S.O.S).

U might have got glimpses of how extreme diplomatic issues can also be solved by the aid of simple payoff matrix.

Let’s go more relevant to you –

WHAT IS SCIENCE OF CLUSTERING IN BUSINESSES?

Probably all of you must have noticed that shops selling same products cluster together, like all in series (electrical people, cheers! 😂😂)

If they have spread throughout the community they would have faced much less competition, but they also lose something. There are many advantages of Clustering. Very first is they are likely to learn from each other, to keep the competition tough there would be a mutual growth of all parties involved. Despite a slight increase in competition, efforts of all the partners are pooled unknowingly to add more new customers as service quality increases. Shops are more vulnerable to failure if located far from competitors.

This is how business flourishes.

You can also refer this :

WHAT DO YOU THINK ABOUT POWER SHARING?

Have you noticed that most of the time small political parties form a coalition with a group of other small parties, not with a big party?

So you can clearly see if B goes with A then majority power will be in hand of leaders of A, whereas power coalition with smaller parties led to a distribution of power as well as the percentage of B also increases.

If you are C or D then also coalition with A will only make you a yes-man, whereas coalition with smaller one can increase your % as well as remaining power also get distributed between rest of two.

CONCLUSION: So we can conclude that any social interaction of ourselves with others are of two types: either it would be cooperative or non-cooperative.

When you are competing and have no mutual trust with others it would be better if you take such decisions which benefits you irrespective of what others decide to do.

Whereas in a cooperative environment where everyone shares a common goal, there must be a fair division of profit, means the party who contribute more should receive more, this should be taken care.

So you just have instilled in you one more dimension to your vision, this would surely help to tackle many problems in future rationally and come up with SOS.

In the end, I would like to apologize if I couldn’t make you understand what exactly game theory is, hence a video suggestion for reference.

Below is the original presentation file of the talk in pdf format.


A huge thanks for your time and patience!

THE EXCLUSIVE POSTER USED AS FEATURED IMAGE OF THE BLOG, CREDIT GOES TO APURVA RANDERIA SIR.