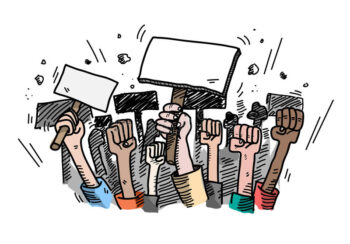 “Non-violence is the greatest force at the disposal of mankind. It is mightier than the mightiest weapon of destruction devised by the ingenuity of man.” – Mahatma Gandhi.

Protests have been an integral part of democracies across the world. Protests are one of the most effective means of displaying dissent towards authority. Today’s blog will discuss the essential aspects of protest, how a protest gets initiated, its driving factors, what makes it successful and what leads to its failure, and famous examples of successful and failed protests in India and worldwide.

How does a protest start?

Protests find their fertile ground in the geographies where political dissidence plagues the society, dissonance between rulers and ruled increases, and people do not trust the country’s institutions. In the first kind, mild dissent will get sensed in the environment where people would look normal and happy with the government, but their disagreement will be seen on social media platforms. The rights promised to them are either not given to them properly or are violated at the top level. In the second type, people come out in the open and gather at a particular place with banners, posters, and pamphlets in their hands and raise slogans against the subject that they are opposing. These gatherings may be small to mid-size, generally get ignored on prominent media platforms although covered at the local level, do not generally affect people’s daily lives in and around the country, and most importantly, have a meager success ratio. When the topic of dissent is severe, the situation can turn grave in a short period. These third types of protests attract large gatherings that occur at different places across the country and sometimes worldwide. They get featured in almost every media outlet, have a high chance of getting violent, and have a more excellent success ratio due to their sheer size. The last and fourth types of protests are enormous, have extreme aims, are often violent, and attract foreign influence. These are mainly directed at those in power and often lead the country into severe change. These changes can be good, but they can also be fatal to the country. Regimes get changed, protests turn into a civil war which overwhelms the country, generations get fatigued, and most importantly, the cost of the protest gets so high that achievement gets blurred in the process.

What are the driving factors behind protests?

According to Dr. Nicole (Fisher) Roberts, Executive Director of Feed A Billion, the following are driving factors behind protests:

According to Shom Mazumder, a social scientist, and fellow at Data for progress, there are mainly four ways to evaluate a protest:

A protest to become successful requires certain ingredients that make a perfect recipe to succeed when mixed perfectly. According to experts, the best way of protesting is nonviolent protests where nobody is harmed, and still many people are attracted to it. In their article “Why Civil Resistance Works,” Chenoweth and Stephan argue that successful nonviolent resistance ushers in more stable and internally peaceful democracies, which are less likely to regress into civil war. Presenting a rich, evidentiary argument, they originally and systematically compare violent and nonviolent outcomes in different historical periods and geographical contexts, demystifying the myth that violence occurs because of structural and environmental factors and is necessary to achieve specific political goals. Instead, the authors discover, violent insurgency is rarely justifiable on strategic grounds. Erica Chenoweth also noted that every campaign that got active participation from at least 3.5 percent of the population succeeded, and many succeeded with even less.

When a group of focused leaders leads a protest, is undivided into different factions, does not get hijacked by opposing powers, and is primarily nonviolent, it has a very high chance of success.

What leads to the failure of protests?

Inactive participation of people, the selfishness of leaders who keep self-interests above people’s interests, lack of leadership, propaganda of opposition overpowering the protest, and many other reasons can lead to failure. Let us take an example of a movement that gained substantial public support initially but vanished into thin air, “Occupy Wall Street.” This movement was started by a group of people who believed that the difference between the quality of life of poor and rich people is vast, and one percent exploits the rest of ninety-nine percent for their luxury. However, after months of protests, it failed to sustain itself. Experts point out a few reasons why this protest, which created a considerable sensation, was unsuccessful. The number one reason that it failed was because of a lack of leadership. This protest was a kind of mob protest organized by unorganized people who were frustrated in their life and blamed their misery on other people thus were not clear what they were doing in the protest. The second reason experts point out is that this protest could not give a clear message, or we can say the message they conveyed was wrongly interpreted in the media and public opinion. This protest was meant to maintain class equality in society but got conveyed as they wanted to remove certain people from society, which many did not see on good terms. The third reason was the name itself, “Occupy” was historically used to signify the unjust occupation of people by another group of people. Furthermore, this made people skeptical that this protest is not going in the right direction, and hence it lost its public support.

Now we will see some movements across the world throughout history and will try to analyze them.

The “Quit India movement,” was organized by Indians from all spheres of life from 1942 until 1947, when India got independence. It was an entirely nonviolent movement that got massive support from every Indian. It made Britishers step down and provide a way for independence to India. It is an example of how a completely nonviolent, publicly supported movement based on truth can overthrow even the most powerful and achieve its aim.

The “Civil rights movement,” carried out in the 1950s and 1960s, is also a famous example of a nonviolent movement against racial inequality prevailing in the United States. It resulted in the passage of several federal laws that helped in improving racial issues in the USA.

The Arab spring started in the 2010s from Tunisia and spread to almost all the Arab nations. This protest was against dictatorships that ruled nations with an iron fist, and gross human rights violations occurred. Once the Arab spring started, many dictatorships got toppled. Initially, it was successful, but soon it led to wrong leadership, and greed took over. Violence spread and countries went into chaos. Various civil wars, religious extremism, and political vacuum led to the creation of groups fighting for their interests, and people’s interests were long forgotten. Hundreds of thousands lost their lives, and millions got displaced. Many countries are still recovering from the devastating effects of movement, which many experts have described as a failure.