In the introduction to this massive ~1600 words blog, I must let you know that this blog intends to ignite or thrill some of the interested minds by discussing how we the humans have understood the universe till now, how the path-defining experiments have to lead us to understand the universe as it is. This blog is about the Nobel prize-winning theory, the existence of the Higgs field, the experiment that had cost $13.25 Bn, the results of experiments, the conclusions, and the aftermaths. 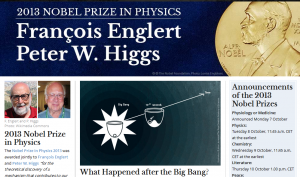 To understand this science of the universe just like 2 + 2 = 4 we have to start by understanding the standard model and its flaw in the 1960s.

So let’s start with the standard model. 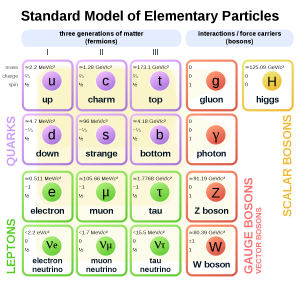 Elementary particles are then categorized into particles having half-integer spin, the fermions and with integers spin, the bosons.

Now the fermions are further divided into two on basis of whether they interact by a fundamental force called the strong interaction or not.

You must be knowing that there are only four fundamental forces in nature, strong interaction, weak interaction, electromagnetism, and the gravitation.

So all those fermions that interact via strong force are called quarks and those who don’t are called leptons. In the quarks category, we have six flavors up, down, top, bottom, charm and strange. In leptons, we have electrons, anti-electron, neutrino, and anti-neutrino.

I have plotted the scene for the story, now let’s begin it. So, the quarks which can interact by strong interaction by exchanging gluons, come together to form composites like protons (uud) and neutrons (ddu) which can be electrically charged or neutral one, these protons and neutrons combine together by virtue of residual force of strong interaction, to form nucleus, it is positively charged and now negatively charged leptons, like electrons begin to get attracted and form orbits around it. This is the way atomic physics work.

But one thing could not be explained by the standard model, what is the reason behind why particles like quarks and electrons have mass whereas particles like neutrino and force carrier particles (the bosons) don’t have mass?

The pioneering team of physicists Peter Higgs and 6 more came come with an extension to the standard model, the new type of boson called HIGGS BOSON to explain why some particles have mass whereas some don’t. So according to the theory mass is not the fundamental property of all particles, but there is some ubiquitous field that permeates in the whole universe which gave the effect of mass or inertia to some particles.

This purely hypothetical field was given the name of the Higgs field. Some of the particles like electrons, quarks, protons, neutrons, etc, interact with this field strongly and exhibit what we feel as inertia and mass. And here we go, the more an object has these type of particles, the more interaction with the field is there and hence more massive it becomes.

I know that it might be sounding very crummy, but if you have reached here then you must not leave till the end.

So the experimental physicist and the engineers at a European organization of Nuclear Research, CERN (derived from the name Conseil européen pour la recherche nucléaire), in Geneva, Switzerland, began to set experimental setup for an experiment that predicted to establish the Higgs field theory by confirming the existence of the Higgs boson.

Here comes the major part of this blog :

The scientists have with them the theory of the Higgs field, to prove it is correct, they had to show the existence of the Higgs Bosons. Considering the Einstein energy-mass equation, E = mc^2, if we can make the elementary particles cruise at speeds close to that of light and make them collide than there are chances that the kinetic energy may convert to new elementary particles never seen before, like the Higgs bosons.

After detailed study and simulations of the collision, it was indicated by the quantum mechanics that about 90% of all the Higgs boson that would be created in collisions would be produced by gluon fusion phenomenon. Gluon fusion results differ by around 20% which can be taken as the theoretical uncertainty of the gluon structure, and the chances of two gluons colliding, give rise to Higgs boson is 1 in 2 billion. However, in this experiment approximately 1 billion proton collides every second, hence the production rate for Higgs bosons is roughly one in every two seconds, which is not at all discouraging.

THE GIGANTIC NUMBERS OF LHC :

World’s largest and most powerful machine made by humans, has spectacular numerical parameters associated with it. The protons need to haul at 0.99991c hence chambers need to be close to perfect vacuum, to avoid collision with any gas molecule. Data literally would be flowing every microsecond hence the need to store and analyze it, all these require engineering at a phenomenal level. The different sections include powering, accelerating, steering and focusing, cooling, storing and computing work in sync surely earns it the tag of greatest effort by the human being to understand the mother nature. 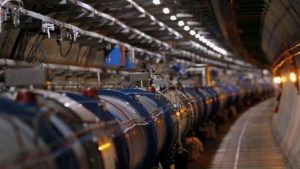 1. The machine consists of a tunnel 27 kilometer in circumference and as deep as 175 meters located at France-Switzerland border. 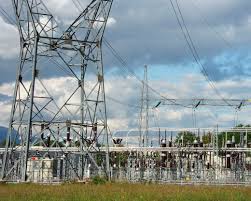 2. The energy requirement is pretty high. Estimate of 800,000 Megawatt hours (MWh) annually that cost around $30 Million per year, which is enough energy to power 300,000 homes throughout the year, is consumed. 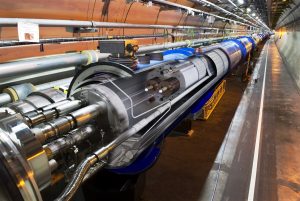 3. The magnets are very large, weighing several tons. They steer protons at 99.99% the speed of light. They are cooled down to 1.9 K (-271.25 degree Celsius), that is colder than the vacuum of outer space! 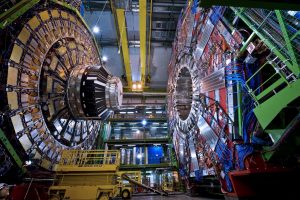 4.  This machine has six points for observation, each loaded with microscopes and digital cameras. Microscopes measuring 45m long, 25m tall and weigh about 7000 Tons. 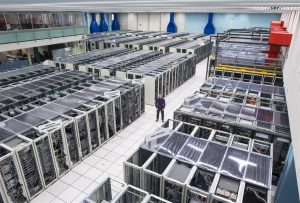 5. Nearly 150 million sensors collect data during experiment generating data at about 700 Megabytes per second (Mbps). On a yearly basis, 15 Petabytes (15 million Gb) data is stored at CERN. To tackle with this problem Sir Tim Bernes Lee with engineer Robert Cailliau invented world wide web in 1989 to distribute data to university and labs around the globe to store and analyze and form the platform to discuss and share.

“CMS and ATLAS have compared a number of options for the spin-parity of this particle, and these all prefer no spin and even parity [two fundamental criteria of a Higgs boson consistent with the Standard Model]. This, coupled with the measured interactions of the new particle with other particles, strongly indicates that it is a Higgs boson.” ~CERN

The Higgs bosons as predicted was highly unstable and decayed in 10^-22 seconds into pairs of photons (γ γ), W and Z bosons (WW and ZZ), bottom quarks (bb), and tau leptons (τ τ) which was perfectly consistent with the Standard model! Hence led to confirmation of the presence of the “HIGGS BOSONS“!

Following are extended results for strong support, for further reading:

To get better about LHC, follow the beautiful video :

Conclusion: First of all the effort and initiative taken by this organization, CERN should be appreciated. Also, this feat can serve as a great source of inspiration and motivation for the new generation of engineers and physicist. This experiment gave us the internet (www) and opened for us a huge source of knowledge. Moreover, the results of this experiment help us to understand the mother nature more closely, and these results might serve in the future for the advancement of science, here on EARTH!
In the end a huge thanks for the time and patience.
Writer will feel appreciated if you follow by a question!
Thank you.
TEAM CEV’