36 Year old, The Supreme leader of North Korea again in the news due to rumors of his death. Kim Jong-un is a Dictator of the Democratic People’s Republic of Korea. North Korea has been a country under a dictatorship since 1948. & Since 1948 the world has seen contradictory growth of two nations with the same culture and language. The Korean peninsula was once one country, then a conflict carved it down the middle and created two nations divided by their rulers’ opposing ideologies, So what circumstances made one nation to divide into two?

Korea is an Eastern country of Asia known as “ Land of Morning Calm “. North Korea shares a border with South Korea, China, and a short border with Russia. The peninsula extends some 1000 km South of the China-Russia border dividing the Sea of Japan on the East from the Yellow Sea on the West. 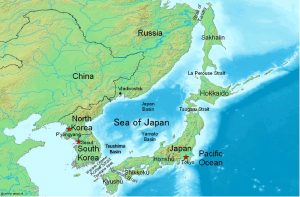 The annexation of Korea took place in August 1910 was based on the “Japan-Korea Annexation treaty”, which stipulated that the Japanese Empire take over the Korean empire, making it a colony of Japanese territory. The 1905 Korea-Japan Convention had already made Korea a protectorate of Japan, the reason was In 1905 the world had seen major upset by Japan over Russia. Yes, Russo-Japanese War. The foundation of the hegemony of japan over Korea is related to this war. So, How does a nation like Japan, which had way less military power than the mighty USSR, won the war?

In between 19th-20th century Japan’s transportation from an isolationist feudal state into a vigorous modern power drew the attention of the world. Meanwhile, Russia had its own political strategies for east Asia. Japan had already eliminated Chinese power in Korea and won over the peninsula of Manchuria in the Sino-Japanese War in 1895. Russian had control over Siberia, and in 1897 Russia had embarked on Railway building on Chinese territory to open it up to commercial exploitation, The famous Moscow-Manchuria rail had the potential of economic control, colonization, and military policy caused alarm among Japanese leaders. As negotiations stalled, on the night of February 1904 Japanese destroyers launched a surprise attack on Russian warships at Port Arthur in Manchuria and Chemulpo (Inchon) in Korea. On 10 February 1904, after the initial assaults had taken place, Japan declared war. Russia was shocked and overconfident about this war. Russia had astonishing weapons and military power but the problem was transportation, the Russian military was in Moscow and it wasn’t possible to export a large army to port Arthur without rail. They still tried to reach there through the Atlantic ocean and Indian ocean but while in the North Atlantic ocean they misunderstood Britain’s ship as a Japanese and attacked it. Brittain didn’t start a war but they blocked ways for them. Death casualties were large on both sides but in the end, Japan had won clear victories at Manchuria and st. Arthur. Japanese forces were exhausted, low on ammunition and the country’s economy was strained. Russia could draw on more substantial reinforcements than Japan. In 1905 peace negotiation began in the US. The Treaty of Portsmouth signed in September 1905 recognized Japanese rights in Korea and ceded Port Arthur, Dalny, and the adjacent territory to Japan, along with control over the South Manchurian Railway. It was a rise in the hegemony of Japan over Korea.

Korean dynasty ruled over unified Korea for 1500 years. From 1910 to 1945 Japanese ruled in Korea. There is the view that Japan’s 35 years of colonial rule improved Korea’s infrastructure, education, agriculture, other industries, and economic institutions, and thus helped Korea modernize. But one should never forget the discrimination and sufferings that the Korean people experienced under colonial rule.

Korea chafed under Japanese colonial rule for 35 years until the end of world war-2. Japan lost world war-2 & it became clear to the Allied Powers that they would have to take over the administration of Japan’s occupied territories, including Korea until elections could be organized and local governments set up. Korea wasn’t a part of the US’s priority but Russia was keen to acquire control of lands that the Tsar’s government had relinquished its claim to after the Russo-Japanese War (1904–05). On Aug. 6, 1945, the United States dropped an atomic bomb on Hiroshima, Japan. Two days later, the Soviet Union declared war on Japan and invaded Manchuria. Soviet amphibious troops also landed at three points along the coast of northern Korea. On Aug. 15, after the atomic bombing of Nagasaki, Emperor Hirohito announced Japan’s surrender, ending World War 2. Now it was clear that southern Korea was occupied by the US and northern by Russia. The US wanted to establish Democracy in South Korea with a capitalistic ideology. On the other hand, Russia wanted communism in North Korea. Without consulting any Koreans, they arbitrarily decided to cut Korea roughly in half along the 38th parallel of latitude, ensuring that the capital city of Seoul—the largest city in the peninsula—would be in the American section. The establishment of the division—made without their input, let alone their consent—eventually dashed those hopes.

The location of the 38th Parallel was in a bad place, crippling the economy on both sides. Most heavy industrial and electrical resources were concentrated north of the line, and most light industrial and agricultural resources were to the south. Both North and South had to recover, but they would do so under different political structures. The US had appointed anti-communist leader Syngman Rhee to rule South Korea. Meanwhile, USSR appointed Kim Il-Sung, who had served during the war as a major in the Soviet Red Army. 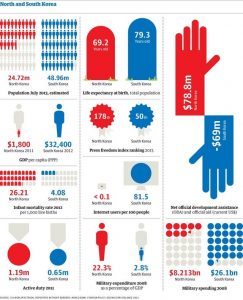 It’s been more than 70 years since Unified Korea split into two. North Korea is now a Stalinist state and is accused of holding hundreds of thousands of people — including children — in political prison camps and other detention facilities across the country. It also receives the lowest ratings when it comes to press freedom and government accountability. Life in South Korea, on the other hand, is fueled by an unashamedly loud and proud style of capitalism. The country is also officially a constitutional democracy. After this many year’s North Korea is far behind South Korea in every aspect whether its economy, industries, human resources, technology. After the demise of the USSR, North Korea was vulnerable and insecure, they languished by spending more money on Military, implied isolatic state rules, business with selected countries & plight of citizens. Whereas  South Korea is a lifestyle fuelled by an unashamedly loud and proud style of capitalism.

The North Korean regime is concerned foremost with regime survival, it regards economic reform as potentially destabilizing. Admittedly, evidence on this point is mixed. Certain recent changes in rhetoric, diplomatic opening, and economic policy signal a will of change. South Korean GDP per capita has more than doubled since the end of the 20th century in 2020. But South Korea would see a loss of around 2.9 trillion South Korean won in tourism revenue if the novel coronavirus spreads rapidly in the country. Hyper competitive lifestyle is the reason behind the increase in suicidal rate,  hard-pressed school children consistently rank among the world’s least happy countries. South Korea might work on the Standard of living in Future. The contradictory growth of both nations leads to the conclusion that the foundation and ideology of a nation & people are essential for a prosperous future.