The ‘union of soviet socialists republics’ or USSR, which was established in 1917 after the Russian revolution against the absolute Tsar, was formally established in 1922. There were 15 subnational Soviet states including Russia, Armenia, Georgia, Kazakhstan, Turkmenistan, Uzbekistan, Kyrgyzstan, Tajikistan, Belarus, Ukraine, and the Baltic countries of Estonia, Latvia, Lithuania.

It was established as a ‘communist country’. As its name suggests, it was the Union of soviets that were based on concepts of socialism. SOVIET is a Russian term that refers to a law-making body and works as a legislature. Every nation in the union had their own soviet as a law-making body like parliament. These soviets were in union with a centralized economy and planning in the capital, Moscow.

USSR was first to introduce the 5 years planning concept which worked very well in the beginning. There was 1 party rule and the representative must be from the communist party. A sequence of soviets was established starting from workers and agriculture soviet to industrial soviet, to regional soviet and finally the CENTRAL SOVIET IN MOSCOW.

As it was a communist union, there were strict prohibitions on private businesses and industries and all the party belongs to the state. 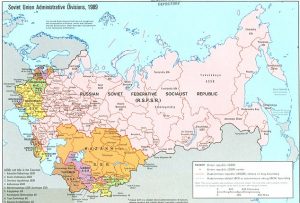 The soviet union was the largest country in the world alone contributing to one-seventh part of total landmass on the planet. And this huge size posed great challenges to USSR. It was a difficult task to control the whole territory and people with different ethnicities living in USSR.

During the formation of the USSR, Lenin believed that people of different ethnicities (Russians, Kyrgyz, Uzbeks, Tajiks, etc.) will slowly assimilate with each other. But these non-Russians people did not assimilate as Lenin believed. And STALIN killed them who differ in ethnicity. This created a demand for Independence in sub soviet states.

GLASS NOT: It means openness in Russian. It granted freedom of speech to media and intellectuals. This created the easing of media censorship. Due to GLASSNOST, the media started criticizing the Gorbachev govt. itself and spread the demand of Independence in sub-national soviets.

PERESTROIKA: It means Reformation. It changed the soviet political and economic structure. It allowed elections, foreign investment, and privately owned businesses, although it started with restrictions, initially. There was no change in the Communist Party but now there can more than one candidate in elections.

These two policies were implemented to improve the conditions of the USSR but ended up with the dissociation of the USSR.

In Poland, Bulgaria, Romania, the communist government was the puppet of general of the USSR and took orders from Moscow. but due to those policies, there was a demand to end this influence of the USSR in these nations.

From the summer of 1989 till 1991 there were revolutions in Poland, Hungary, East Germany, Czechoslovakia, Bulgaria, Romania and Yugoslavia, one after another. There were nationalists movements to gain Independence from USSR influence and communist puppet govt.

Gorbachev did not send a red army to suppress the protests or movements because he thought this will not harm the fate of the USSR. In December 1989, Bush sr. announced the end of the Cold War because slowly communist governments in eastern European nations were collapsing. The Baltic countries declared their Independence from USSR. They believed that they were never been part of the USSR.

Throughout 1990-91, one by one all the 15 subnational soviets became Independent. And in reelections, the Communist Party was defeated everywhere. 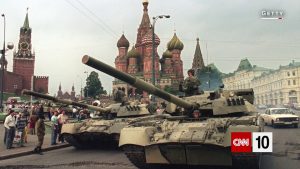 BORIS YELTSIN ( leader of Moscow unit of the communist party) advocated for independent Russia and was against the coup. Later he became the first elected president of Russia. After the failed coup, the breakup process accelerated.

8 DECEMBER 1991 – the presidents of Russia, Ukraine, and Belarus signed BELAVEZHA ACCORDS, which dissolved the USSR and established the COMMONWEALTH OF INDEPENDENT STATES ( CIS) in its place. Gorbachev RESIGNED as president of the USSR on 25 Dec.