Are we the only living things in the entire universe? The observable universe is about 90 billion light years in diameter. There are at least one hundred billion galaxies, each with one hundred to one thousand billion stars. Recently, we’ve learned that planets are very common too. And, there are probably trillions and trillions of habitable planets in the universe, that revolve in the Goldilocks zone of their own stars. Which means, there should be lots of opportunities for life to develop and exist. But where is it? Shouldn’t the universe be teaming with spaceships?

Even if there are alien civilizations in other galaxies, there’s no way we’ll ever know about them. Basically, everything outside our direct galactic neighborhood, so called “Local Group”, is pretty much out of our reach forever, because of the expansion of the universe. Even if we had really fast spaceships, it would literally take billions of years to reach these places, travelling through the emptiest areas in the universe. So, let’s focus on the Milky Way. 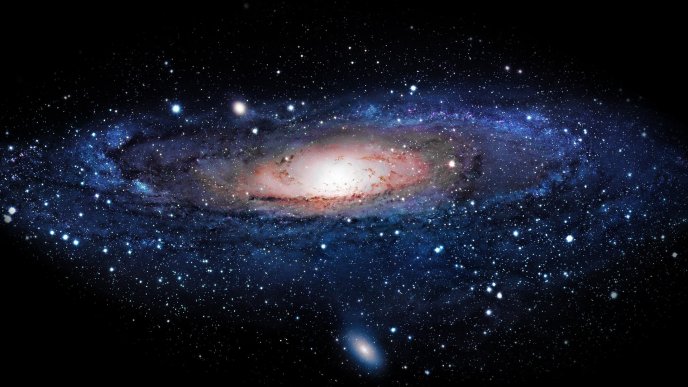 The Milky Way is our home galaxy. It consists of up to four hundred billion stars. That’s a lot of stars, roughly ten thousand for every grain of sand on earth. There are about twenty billion sun-like stars in the Milky Way, and estimates suggest that a fifth of them, have an earth sized planet in its habitable zone “i.e the Goldilocks zone”, the area with conditions that enable life to exist. If only zero point one percent of those planets harbor life, there would be one million planets with life in the milky way. But wait, there’s more. The Milky Way is about thirteen billion years old. In the beginning, it would not have been a good place for life, because things exploded a lot. But after one to two billion years, the first habitable planet was born. Earth is only four billion years old, so there have probably been trillions of chances for life to develop on other planets in the past. If only a single one of them had developed into an interstellar civilization, we would have handshakes by now.

There are three categories.

Dyson Sphere is a hypothetical megastructure surrounding the sun and effectively uses the energy of the sun to fulfill the energy requirements of the planet.

3. Type three is a civilization that basically controls it’s whole galaxy and its energy. An alien race this advanced would probably be godlike to us.

If we were to build gen operation spaceships that could sustain a population for around one-thousand years, we could colonize the whole galaxy in two million years. Sounds like a long time, but remember, the milky way is huge.

So, if it takes a couple of million years to colonize the entire galaxy, and there are possibly millions, if not billions of planets that sustain life in the Milky Way, and these other life forms have had considerably more time than we’ve had, then, where are all the aliens?

This, is the Fermi Paradox, and nobody has an answer to it. But there are some possible answers.

A filter in this context represents a barrier that is really hard for life to overcome. They come in various degrees of scary.

One: There are Great Filters and we’ve passed them. Maybe it is way harder for complex life to develop then we think. The process, allowing life to begin, hasn’t yet been completely figured out, and the conditions required may be really complicated. Maybe in the past, the Universe was way more hostile, and only recently things have cooled down to make complex life possible.

This would also mean that we may be unique, or at least one of the first, if not the first civilization in the entire Universe.

Two: There are Great Filters and they are ahead of us. This one, would be really really bad. Maybe life on our level exists everywhere in the Universe but it gets destroyed when it reaches a certain point, a point that lies ahead of us.

For example, awesome future technology exists, but when activated, it destroys the planet.

The last words of every advanced civilization would be:

“This new device will solve all of our problems, once I push this button!”

If this is true, then we are closer to the end than the beginning of human existence.

Maybe there is something out there, that it would be better not to discover. There is no way for us to know.

One final thought: maybe we are alone. Right now, we have no evidence that there’s any life besides us. Nothing. The Universe appears to be empty and dead. No ones sending us messages, no one answering our calls. We may be completely alone, trapped on a tiny moist mud ball in an eternal Universe. If we let life on this planet die, perhaps there would be no life left in the Universe. Life would be gone, maybe forever. If this is the case, we just have to venture to the stars and become the first Type Three civilization, To keep the delicate flame of life existing, and to spread it until the universe breathes its final breath, and vanishes into oblivion.

The universe is too beautiful not to be experienced by someone.