Can you imagine a day without electricity?  In this modernized world, we are heavily dependent on machines which directly or indirectly rely on electric power either your mobile, laptop, cooling, lighting equipment, automobiles(electric), trains, metros, medical equipment etc. The system involving the process from the generation of electric power to transmission to distribution is termed as power system. The power system is the largest and most complex man-made physical system.

The power system is a system that deals with the generation, transmission, distribution and the consumption of electricity. Power generating stations are not always close to the load centres especially in case of hydro, nuclear, and tidal generating stations. Here comes the role of electric power transmission. The electric power is transmitted over HVDC/HVAC lines which is then received by substations of various load centres where distribution sector comes into play.

Also, all power plants can’t work throughout the year with same capacity due to many factors (like weather factors, fault, maintenance etc.), so they need power back up during that time from other generating stations. Due to all these factors, for an uninterrupted power supply, the power grids of different parts need to be interconnected.

The fault occurred at any of these units may result in severe damage to the system. The most common faults are short circuit and rare one is the open circuit fault. The fault may occur due to a number of factors that may be natural, physical, mechanical or chemical etc. The main factors for the fault are natural including winds, lightning strike, floods and many others which are not in our control so under such condition it becomes very important to have fast, effective and efficient protective devices.

The effects of faults can be very drastic, under severe condition it may result into blackouts, failure of the power grid. One can understand it by the effect of power cut off in hospitals, transportation, mining sites, industries, and other institutions solely dependent on electric power. If you are a regular reader of CEV blogs then probably you would have striken with one of the amazing blogs over the blackouts in India and Ukraine by Rahul Kumar.

The faults are mostly short circuit faults in both DC or AC transmission lines, 60-80% of which occurs due to natural factors like strong winds, cyclones, lightening etc. In India, most of the electric transmission occurs on high voltage 3 phase AC lines though we are moving towards HVDC lines for long distance transmission due to several advantages over ac transmission

HVDC is a complement of AC, not a competitor.

Now, let us come back to the discussion over fault. It is clear that the protection from fault is of immense importance. As soon as the fault occurs it becomes very important to detect, locate and isolate the faulty system to protect the rest of the system. The very first step for the protection against fault is to locate and detect the type of fault. Previously we were having electrically and mechanically controlled devices which are slow and less efficient. Now we are having power electronic devices to sense the faults very fast (senses faults in milliseconds). Here comes the role of relays. A relay in simple language is a device which senses a disturbance in the power system based on the measurement of current, voltage phasors or various other criteria and sends signal to take suitable action. There are number of relays available but most widely used is distance relay whose functioning can be explained as follows-

Distance Relay- Distance relay observes the power system based on the calculation of apparent impedance using the synchronised voltage and current phasors measurements at the bus where relay is provided. They are fast, accurate, directional, can provide backup protection. Primarily they were used only for transmission line protection but now they are also used for generator backup, transformer protection etc.

Symmetrical Components– To analyse the faults, sequence components are used as the faulted system may or may not be balanced, so it is better to convert the 3-phase system into the 3 sets of 3 balanced phasors –

Now the sequence component can be calculated as:- 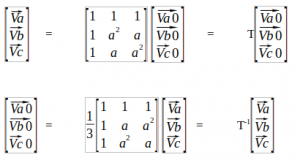 Similar conversion can be done for the current phasors also. 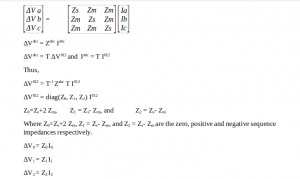 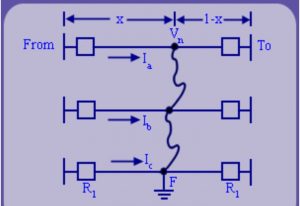 Now, x can be determined as the ratio of apprent impedance seen by the relay to the positive sequence impedance of the line and thus, the fault can be loacated using the line current and voltage measurement. 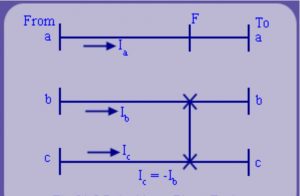 which is same as the above case, so these two faults can be located with the same set of equations. 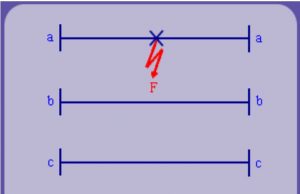 The above equation is used for locating the ground faults. 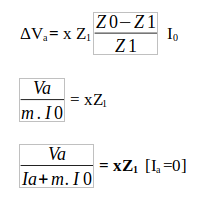 So, the ground faults can be detected by the above equations.

This is how the distance realays work. But the assumption described above are not found in pracitcal scenerios and hence creates inacuracy in the meaurements. To avoid that, models needs to be modified accordingly.

Zone 1 is set upto 80% of the primary line impedance. The complete primary line is not considered in the zone 1 because measurement instruments (CT,PT) are present near the buses which are prone to give errors in measurement of apparent impedance, thus making it difficult to locate the fault. In addition, the assumptions used in the equations for the relays are not valid in the practical cases.

Zone 2 covers the complete primary line impedance and 50% of shortest adjacent line impedance. This is done so as to overlapping of zone 2 of 2 different relays. For example, in example below if zone 2 of R1 covers more than 80% of the BE then it will overlap with the zone 2 of DE which may create undesirable competetion between them to send the trip signal.

For example- Consider a 5bus system as shown below-

When fault F3 occurs the primary relay R3 should get the first chance to trip the signal and if it fails then zone 2 of R1 and finally the zone 3 of some relay should come into play. This is a crucial consideration as the objective of the power system is to supply the maximum possible power to the consumers. To ensure this, zone setting is done along with providing a time delay called CTI. Zone 2 is provided with 1CTI while the zone 3 is provided with 2 CTI as explained in the following timing diagram- 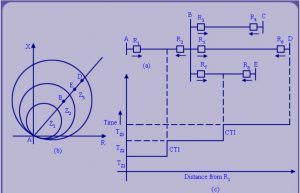 This is all about how distance relays works and how the fault can be detected but the principle of working also involve a number of situations that may lead to mal-tripping of line. Maltripping occurs when the apparent impedance seen by relay enter into the sensitive zone of the relay in a non-fault condition and the relay interpret it as fault issuing trip signal. The mal-tripping events are mainly associated with the zone-3 as it is extended over very wide area to provide backup protection. This situation may cause drastic impact on power system especially under overloading codition. Under stressed conditions, when any such maltrip occurs this resluts in increase in load over the other lines  as system will tend to draw power from the other path causing cascaded outage and blackout. The blackout occurred in 31 July, 2012 in India is initiated by distance relay zone-3 maltripping of Bina-Gwalior line.

This effect is now almost nullified by the advancement in technology and modification in the operation of distance relay. Consider a 4bus 3 source system as shown below-

The above equation clearly indicates that Z­­r is increased by-

due to infeed from generator 2. This may push the Z­­r to move outside the sensitive zone of the relay and hence decrease the dependability of the relay.

This pushes the impedance into the sensitive zone of the relay, and may detect fault even for the healthy system and hence decreases the security. This is highly undesirable as it may lead to casacaded outage and blackouts.

Load encrochment or overloading is the major reason causing zone-3 maltripping. In the power system, energy is not stored so, the equivalence between the generation and consumption of power is must. The power consumption is not uniform throughout the day and it also varies depending on the weather conditions. In India, demand is at peak during day hours of summer due to heavy operation of coolers, ACs, fans and pumps for irrigation in the farms. In addition, many hydro power plants fails to supply power in summer due to deficiency of water. Under such cases, power system operate close to its stability limit and any contingency under such situation may result in maltripping, cascaded outage and the blackouts. One such example in front of us is the blackout of July, 2012 in India. India is energy efficient country but still the above mentioned condition may cause overloading and turn the system stressed. The depecndancy on electric power is increasing day by day over the world. Though the generation of power is increased at very appreciable rate yet the consumption rate is not perfectly matched. Consequently, in the near future, the probability of power system to work at its stability limit will increase and for ensuring the reliability and security of power system, preventing measures to avoid such cascaded outages must be introduced, some of which are discussed briefly later in this section:

Apparent impedance seen by the relay R is given by-

Under peak load conditions, power flow from the bus i towards bus j (P-jQ) will be very high and the increase in reactive power flow also decrease the voltage. The combined effect of these may cause the Zr  to enter into sensitive zones of the relay causing maltriping which decreases the security of power system and may lead to voltage collapse, cascaded outage and blackouts.

To avoid the malfunctioning of the relays due to load encroachment, a number of methods are being described. Some of the methods proposed are: 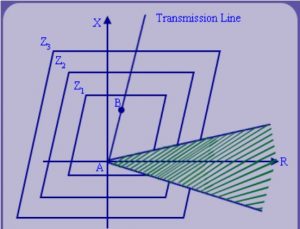 And many other such techniques. But still we don’t have economical and completely effective method without any drawback.

The most practical and widely adopted methods are ‘c’ and ‘d’ which are based on the connection between voltage stability and load fluctuations.

Firstly, letus discuss about Volatage stability. It is ability of the power system to maintain steady voltage at all the buses, when subjected to a disturbance. Voltage instability may arise due to loss of load, tripping of transmission line, cascaded outages, loss of synchronism of the generator, mismatch between reactive power demand and supply, high inductive reactance of transmission line causing high voltage drop etc.

Based on the duration of distubance causing, instability it is classified into following categories-

The power transfers from bus 1 to 2 are given by-

The above equations are derived from power flow analysis.

Eliminating δ from these two equations,

Now, based on the above equations power and voltage relationship can be discussed in the following way- 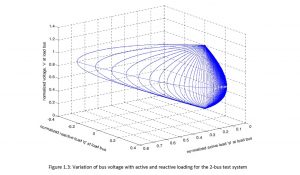 2. V-P Curve- The figure below depicts that maximum active power transfer limit increase and the rate of decay of voltage with ‘P’ decrease with increase in the power factor as shown below- 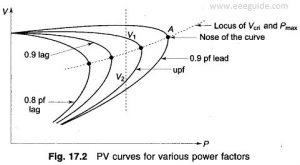 and thus the nose point power or

So, the maximum limit of the active power at specific power factor exists above which the system may fail to maintain the voltage stability. 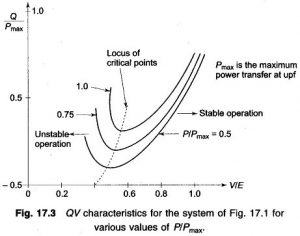 From this discussion, it is clear that voltage stability decreases with the load encroachment. Thus it is justified that both the distance relay maloperation and voltage stability are related to load encroachment in a similar way. Utilising this relationship, VQ sensitivity can be used as criteria to define the weakness of the bus and thus for the load shedding. This property can be used for providing an adaptive load shedding scheme to avoid the distance relay maloperation.