The greatest stuff that matters more than anything else for humans is the source of energy to run his dear machines. In fact, he is far more hearty and concerned about food for his machines than himself. This hunger had led him to exploit coals, gas, petroleum and in some amount the nuclear and renewable sources to meet his ever-increasing needs. There is absolutely no doubt that the standard of living of each human on earth should be equal and magnificent, this comes on the cost of energy expenditure. The point of concern is that whatever ways he has devised has many issues associated with it, the limited amount and harmful effects on the environment are the most depressing. The coal mines and oil wells in the near future will definitely exhaust. Imagine where would we stand if we have no source of energy for our hungry electric motors, IC engines, etc. The production of energy in a conventional way is fast approaching to its ends along with it causing hostile climate changes, the scary nightmare for us.

Now just imagine the deployment of a source to meet the energy demand that tends to provide humans for thousands of years, in fact, millions of years of service and also has almost negligible effect on our environment, just imagine the peace and prosperity of humans on earth, there would be heaven, no wars, no one deprived.

And I am not just asking you to imagine instead believe it. This feat if humans establish than it would surely be his greatest achievement.

You have guessed it right the NUCLEAR FUSION, creating miniature stars on earth. Yes this seems impossible surely, we have been failing at it from tens of decades but this is the reason why human rules on earth because “he believes in believing and achieving”. 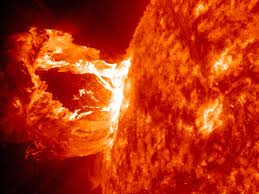 Basically, this blog intends to discuss the phenomenon of the nuclear furnace of the universe and endeavor required to mimic it on earth. We will discuss in somewhat detail the classical physics and the quantum physics behind the process, and what exactly we need to do to get the sun here on earth, the advantages and the work done and the reason for failure till now thereby quenching our thirst of curiosity regarding this topic.

THE PHYSICS OF NUCLEAR FUSION

Atoms are fundamental building blocks of matter, they comprise of a nucleus and the electrons orbiting around it. The nucleus, volume wise is very small, a grain in a room if compared but carries the 99.999% mass of the whole atom. The nucleus is made up of particles called hadrons the protons and neutrons. Refer to the standard model for particle classification.

Protons have unit positive electric charge and neutrons are neutral. Since the protons are very close thus electrostatic force must be repelling with huge magnitude, but we know nucleus do exist hence we can easily conclude that some stronger attracting force must be there to bind them together, the force should be enormous as well as very short range, otherwise there would be no discrete matter at all. These forces are named nuclear force and they are characteristics property of both protons and neutron.

So as result of work done by strong nuclear force against electrostatic repulsion, a large amount of energy is released when a nucleus is formed, this energy released from the formation of a nucleus is called binding energy. You can see that more the number of nucleons are there more the energy is released but this hold true only up to nucleus which contains less than 56 nucleons, as nuclear force gets weaker exponentially with increasing distance. 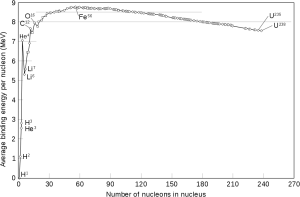 So we can analyze that to tap this enormous binding energy we have to synthesize nucleus, there are two techniques to make this happen:

The complication in the second case can easily be spotted. To make a bigger nucleus unstable is far easier than to force two smaller stable nuclei to form an unstable nucleus because nucleus greater than 56 atomic number are having less binding energy per nucleon hence firing it with a neutron or something can easily make it lose its stability. Whereas forcing two nuclei to fuse, is certainly a tedious job on earth at least. We have to overcome the great electrostatic force as they approach closer to form a new nucleus, but the unstable nucleus decay to products that will have much higher binding energy, as graph increases linearly till atomic number < 56.

Before I start this section let me make you one thing clear, strictly saying “NO ONE ON THIS EARTH IS ALLOWED TO ASK THE QUESTION WHY, WHEN PHYSICISTS ARE DESCRIBING HOW NATURE WORKS!!!”, we have to just follow through their theories because it is the way it is. We just have to check if their theories actually fit into the phenomenon or not, that is the aim.

Quantum description of nature is seriously very hard to understand and far harder to sing it to others. However weird and virtual quantum theory appears, it is the reason behind this technological era and also future “the quantum computers!”, won’t go off topic.

Quantum describe particle not as like definite point. Instead, it says that particles are mere disturbances in their corresponding field and describe them mathematically as wave function or probability functions. Classical mechanics strictly deny this process to occur as electrostatic force tends to infinity as distance tends to zero, but quantum says that it can happen, there is a probability. This is called the quantum tunneling effect.

Wikipedia says: “Quantum tunneling is the phenomenon where a particle passes through a potential barrier that is classically unsurmountable ”.

Schrodinger equations when solved and analyzed, it indicate that the nucleus has a probability that it can fuse with other nucleus and this probability goes on increasing as the kinetic energy of colliding nuclei increases. They explain it like the overlapping of the waveforms that represent the two nuclei.

Again you have to agree with this description because here is series of examples of the applications of quantum tunneling: nuclear fusion in stars, tunnel junction, tunnel diode, tunnel field-effect transistor, quantum conductivity, scanning tunneling microscope, quantum biology, etc.

Nuclear fusion can be called the ultimate source of energy of the universe. Stars are powered by this and virtually all the atoms (elements) are produced in this process which is also called stellar nucleosynthesis. The type of fusion reaction followed depends on the mass of the star, the pressure, and temperature of its core.

If we consider our own star the sun then it utilizes the nuclear fusion of hydrogen into helium at 14 million kelvin core temperature. 620 Million tons of hydrogen per second fuses to form 606 Million metric tons of helium each second. The net rate of mass-energy conversion is 4.26 million metric tons per second, which produces the equivalent of 38,460 septillion watts (3.846×1026W) per second, this really very hugeeeee!!!!!! 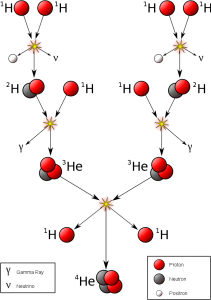 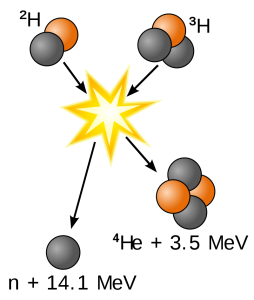 We are looking for this reaction because it is the most feasible and reactants are easily and abundantly available. Considering the fueling up of smaller atoms with kinetic energy to break the Coulomb barrier, scientists have chosen single proton species to bang together. The reaction deuterium-tritium seems to be a perfect choice. 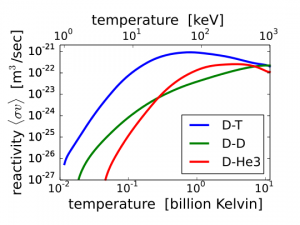 The DT rate peaks at a lower temperature (about 70 keV, or 800 million Kelvin) and at a higher value than other reactions commonly considered for fusion energy on earth.

In this reaction, deuterium and tritium isotopes of hydrogen are first ionized to become bare nuclei. The calculated coulomb barrier is  0.1 MeV. After crossing this limit the immediate result of fusion is the unstable 5He nucleus, which immediately ejects a neutron with 14.1 MeV. The recoil energy of the remaining 4He nucleus is 3.5 MeV, so the total energy liberated is 17.6 MeV. This is many times more than what was needed to overcome the energy barrier hence the result is net energy output.

Plasma is thus magnetically and electrically responsive. In bulk its modeling is done using the science of magnetohydrodynamics, this is the combination of the motion of fluid governing equation the Navier Stokes and electric and magnetic field behavior governing equations called Maxwell’s Equations.

Now the problem is how to confine the extremely hot plasma. There doesn’t exist any material which can stand firmly at 300 Million kelvin, that doesn’t degrade by the constant bombardment of high energy neutrons and other particles.

WHAT IS THE MECHANISM?

There are two famous approaches to do this:

ITER (International Thermonuclear Experimental Reactor), in Latin ITER, means”a way”, a prestigious organization having headquarters in France established in 2007, its members include India, US, Russia, China, Japan, Korea, and the Euratom. Its purpose is to research and demonstrate the technological and feasibility of fusion energy for peaceful purpose. The ITER employs a mega machine called tokamak. The stellarator is also one of this kind. Here is an awesome video to make the mega monster easy to understand:

2. Inertial confinement: Fusion is achieved by compressing and heating fuel pallet. Mega Intense laser beams rapidly heat inside surface of hohlraum. The fuel is compressed by rocket-like throw-off of the outer surface material. Finally, the fuel is ignited at a temperature of about 100,000,000 degrees Celsius. And the NUCLEAR FUSION occurs producing far more energy than taken by the laser system in the beginning.

Just as ITER pioneers the magnetic confinement the NIF (National Ignition Facility, California, US) leads the way in inertial confinement fusion. Here the short clip on that:

Here is a quote from one of the greatest physicist of the 20-th century: 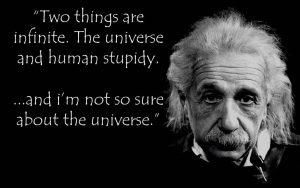 So, there is no doubt that it was the feats of our earlier scientists and engineers who led us to where we are today and it is we who will decide the future of human civilization, and we must be happy that we are putting the efforts at an incredible rate, and till then we have to make sure that we too at individual level are playing our assigned role in this universe of the “ALMIGHTY”.

Thanks for your time and patience.