What is GDP? By definition GDP (Gross Domestic Product) is the market value of all finished good and services produced within a country in a year.

Explanation: A finished good is a good which will not be sold as part of some other good. For ex-eggs

Case 2: If same eggs are bought by a consumer to make an omelet then egg will is considered as a finished good as it won’t be sold again as a part of some other good.

GDP only counts for goods and services produced within a country, this means that if you buy a mobile phone imported from united states that adds to united states’ GDP, not India’s, on the other hand, a cloth manufactured in India and exported to France adds to India’s GDP.

A country’s GDP may increase in 2 ways-

#1 Only the GDP number goes up but the economy is not producing more goods and services, how is possible? Well, in this case, it can be inflation which is the driving force of the higher GDP, this increase looks good on paper but its just a mirage.

#2 Actual increase, in this case, the country is actually producing more number of valuable goods and services.

Now there are multiple ways to measure the GDP of a country. We will look at 3 of them, #1 GDP in nominal terms; #2 GDP in real terms; and #3 GDP in PPP terms (purchasing power parity).

The following equation is used to calculate the GDP:

This does not take into account the inflation rate.

#2 GDP in real terms – it takes into account inflation.it adds up all goods and services produced in an economy over the same set of prices over the years. It shows that if the prices of goods and services hadn’t changed over the time then what would be the GDP.

#3 GDP in PPP terms:  GDP PPP is gross domestic product converted to international dollars using purchasing power parity rates. Purchasing power parity (PPP) is a neoclassical economic theory that states that the exchange rate between two countries is equal to the ratio of the currencies’ respective purchasing power. for example, if a burger cost 2 dollars in the US and the same burger cost 40 rupees in India the PPP ratio is 20. This is the reason why GDP in PPP terms in the case of poorer countries is much higher than the nominal GDP as goods are available at cheaper rates as it takes into account the exchange rates of countries. A fall in either currency’s purchasing power would lead to a proportional decrease in that currency’s valuation on the foreign exchange market.

Current nominal GDP per capita rankings are (US $):

Current GDP PPP per capita rankings are (in US $):

Here the major difference to notice is that poorer countries have low nominal GDP but higher GDP PPP this is because of exchange rates. 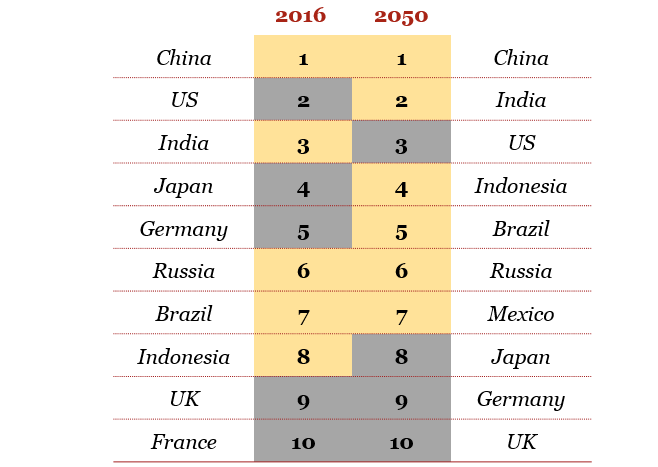 China is expected to be at the 1st position in 2050. while India will overtake GDP of United States by 2045 and will eventually overtake China by the year 2080. While the US’s economy will not be able to grow as fast as that of India’s and China’s its share in the world economy will begin to shrink.

The US is currently the world’s largest economy will a GDP of over 19.4 trillion US$.

The Chinese economy is predicted to grow at an annual average rate of 4 to 5% by 2050 which will make it the world’s largest economy by 2032 (by overtaking the United States) and remain at 1st spot till 2060 at least with a GDP of 58.1 billion $.

China is currently the world’s largest economy in PPP terms having an 18% share of the world economy.

India is growing fast at an average rate of 6.5 % to 7 % in the past 10 years, in fact, it is the fastest growing major economy in the world along with China and is expected to grow at this rate of many years to come.

It is expected that India will maintain a steady growth rate of around 5.5% for the next 5 to 6 decades and will overtake the economy of United States by 2045 and will eventually overtake China by 2070 to become world’s largest economy.

What’s the difficulty India is facing and why is India not growing faster?

The major problem for India is its huge population, India is projected to have a population of 1.66 billion in 2050 which means that though it will become the largest economy, still the people of India will not be as rich as say an American or a Chinese.

For ex- say the population of the US in 2050 is 340 million and its economy is 34 trillion $ then its per capita income will be 100,000 $ whereas in the case of India the population will be 1.66 billion and the GDP will be at about 44 trillion $ which means that India’s GDP is much higher than that of US but still due to its population, the per capita income in India in 2050 will be 26,000 $ which means though having a huge economy, people of India will be 4 times poorer than the people the US and will be at par of the world economy.

And secondly, India is nowhere close to its fullest potential for growth.

India has an excellent geography, a very huge amount of people in the working age group and its current economy not very huge at 2.6 trillion $, considering these factors India’s growth predicted by some of the great economists is 20%. But the factors which are stopping India from growing are lack of infrastructure, its education system, fluctuating electricity supply, political issues and many more. But still, after considering all these factors India is doing very well and is on the right track and hopefully, it will become the world’s largest economy very soon.

The world economy could more than double in size by 2050, far outstripping population growth, due to continued technology-driven productivity.

Six of the seven largest economies in the world are projected to be emerging economies in 2050 led by China (1st), India (2nd) and Indonesia (4th), the US could be down to third place in the global GDP rankings while the EU(European Union) share of world GDP could fall below 10% by 2050.

But emerging economies need to enhance their institutions and their infrastructure significantly if they are to realize their long-term growth potential.

India needs to realize it’s potential and work on it accordingly and if India does so then who knows India will be the world leader of the economy very soon.

One thought on “GDP: An Insight in Economics”