We are in the middle of a crisis. Not just the Covid-19, but the psychological turmoil of making money from every single dime available, even if it costs the whole economy’s meltdown. Does the short term or long term recession teach a lesson and put an end to this? It doesn’t seem so.

Something similar happened in mid-2008, whose foundations were laid in America’s housing market and the whole world had to face the consequences.

We’ll go step by step, starting from understanding the housing system and how it all collapsed. Don’t get muddled by the terms used ahead, as the concepts behind those are simple. The wall street people use these terms to keep the common people out of their way.

You must be familiar with the term mortgage. In case you are not, visualize it like this- you want to buy a $100,000 house, but you have only $30,000 with you. You approach a bank and ask for a loan. You pay $30,000 as a down payment, the bank lends you the rest of the money and based on your net worth, income statement, etc. bank decides a term of repayment and a reasonable rate of interest. Let’s assume this rate to be 10%. The bank allows you to pay it off in 30 years as monthly installments.

So your wealth will still be increasing even though you have to pay interest on the mortgage to the bank. It’s a win-win situation for all.

Building The Castles Of Money

Banks don’t always keep these mortgage bonds to themselves. They sell it to big investment banks and earn a nice commission. So the interests that you were paying on your loan went to their pockets now. But these small transactions didn’t keep the adrenaline of the big banks and investors running. So they came up with the idea of Securitization Food Chain. The idea was to bundle thousands of these mortgages on home loans along with mortgages on several other loans and sell it all together. This way, the yields will go up, and they assumed the risk to be still low as the housing market was always considered vital. They called it Mortgage-Backed Securities (MBS). The deal sounded like music to the ears of investors. So the investors all over the world leveraged lumps of money and invested heavily in these MBS, packed in a small magical box: a CDO.

A Collateralized Debt Obligation or a CDO classified the above- mentioned mortgage bonds as per their risk of returns, the risk of trusting people that they will pay their mortgage on time. The ones who have a nice flow of income have a low risk and are rated AAA. Below them are AA, BBB, and the worst are BB-rated. BB refers to the houses owned by highly irresponsible people who hardly deserve to get a loan. These BB-rated mortgages are referred to as Sub-prime Mortgages. All these ratings are given by separate rating agencies that played a significant part in setting the crisis’s blueprint. All these bonds are then further sold to investors at a nice profit. The whole system was great because almost everyone earned a good profit and kept their cashflow running until things took an ugly turn. 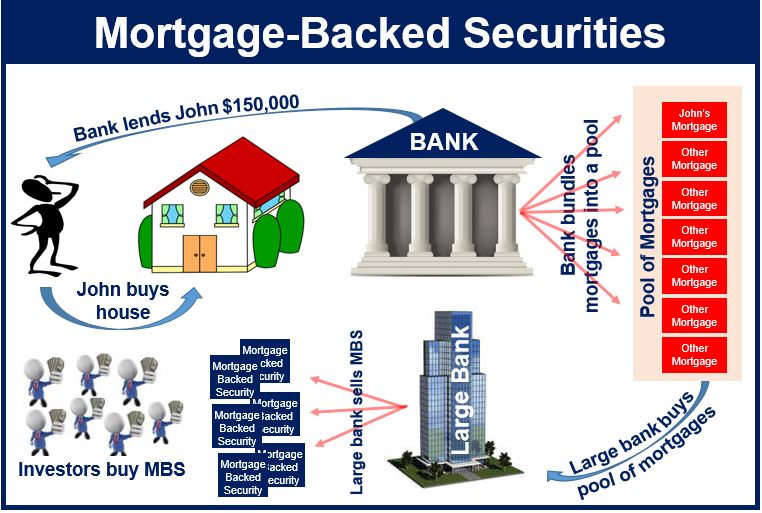 The Inflation Of Real Estate Bubble

As the investors were earning good returns and demanded more MBS to invest in, but they couldn’t find any because most of the ‘eligible’ families already had a mortgage. So the banks started giving out homes to less responsible families, with zero down payment, no income certificate, nothing but just a formality of paperwork, and a promise of payback. They didn’t think of it as an issue because even if the families don’t pay, investors will own the house, which is also a great asset until there are so many houses for sale in the market.

In that situation, the ratings of those risky mortgage bonds would have gone down, right? But that didn’t happen. There was no one to ask the rating agencies how they were giving out the ratings. They were an authority in themselves whose ultimate aim was to impress their clients and earn money. The investment banks paid these rating agencies to rate their bonds and these agencies had no liability if their ratings proved wrong. They claimed the CDOs made by them had 90%+ AAA-rated bonds, but under the hood, it consisted of highly irresponsible homeowners who didn’t even deserve to get a $100 loan. So all these pieces of worthless junk bonds were bundled and sold as if they were gold, and no one bothered to look what’s inside. Investment banks were making profits by selling CDOs and agencies were getting paid for giving AAA ratings. Real estate prices skyrocketed as it was so easy to own one. A boom like this is called a Market Bubble– where everyone is so flattered with something in the market that they believe its demand will never go down and its value keeps on rising, even much more than its actual self-worth. But these prices are not more than an illusion created by fraudulent systems. These bubbles eventually burst and make a hard impact on everyone’s life. This time it was the Real Estate bubble in America that burst aloud in 2008.

Getting Insurance To The Crisis

The highly unregulated derivatives market of the USA allowed the bankers to gamble on anything. They could bet on the rise and fall of oil prices, bankruptcy of a company, or even the weather. Some of the psychopaths saw that the fall of the real estate was coming. So they introduced the Credit Default Swaps which were like insurance to the mortgage bonds. The buyer of these swaps will pay monthly premiums to the seller and the latter will pay colossal money to the former if the underlying mortgage bond defaults or fails. The demand for these swaps kept growing as more and more people realized that the housing market would crash. These swaps were packed in Synthetic CDOs.

So who was buying these swaps? The ones who were selling the underlying bonds. The investment banks were selling AAA-rated bonds in the markets and on the other hand, purchasing swaps on BB and BBB-rated bonds, as they knew the bonds would eventually fail.

Some highly corrupt officials even represented banks in the morning and the rating agencies in the evening. They packed the extremely risky bonds in the morning for the availability of bonds in the market and rated them 90% AAA in the evening for the investors’ sake. They also introduced a new complex derivative- a CDO of a CDO, called CDO Squared. The sole purpose behind their existence was to introduce more financial instruments in the markets, so there is always something to bet on. Let us see how they turned the whole world into a giant casino-

Suppose A and B are playing a game

There existed CDOs and synthetic CDOs as a bet against CDOs. Eventually, a $50 million investment had more than a billion dollars betting against it. The market for insuring bonds grew 20 times larger than the actual mortgage. The major players in this whole circus were investment banks like Goldmann Sachs, Morgan Stanley, Bear Stearns and Lehman Brothers, financial conglomerates like JP Morgan and Citigroup, securities insurance companies AIG, rating agencies like Moody’s, Standard & Poor’s, and many more. But from where was all this money coming? And how did they get the gigantic guts to borrow and invest? It was all possible because of the highly unregulated markets and the availability of cheap credit. Probably they all knew about the dangers they were playing with, but they also knew one more thing- they had grown so large that the government would have to save them if they go bankrupt, otherwise the economy would collapse. And that’s exactly what happened. The American taxpayer had to pay for all of their gamblings in the form of emergency guarantees and bailouts by the Federal Reserve. Several papers were published, a lot of people doubted about the crash, but nobody did anything tangible, not even the Federal Reserve.

You can now see how a system of billions and billions of dollars depended on a lie. Everyone was playing with a time bomb. This real estate bubble was about to burst and the whole world was about to hear it loud.

The Burst of The Bubble 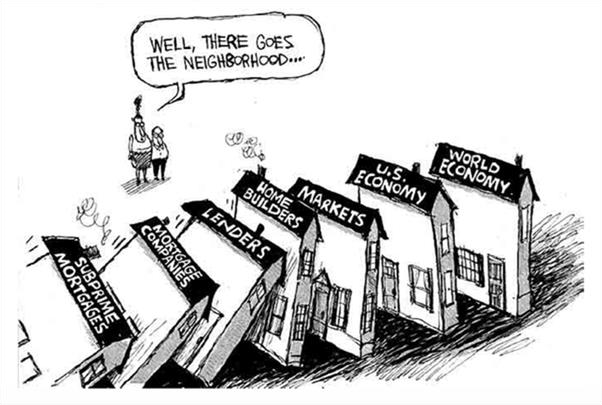 When markets hit a little low in late 2007, people started to default on their mortgage and started leaving the houses. The number of these faulty people skyrocketed. The supply of houses in the market became much higher than demand, resulting in the breakdown of the prices. Now there was no sense in paying a $100,000 mortgage for the house worth only $90,000, even for those who were able to pay it.

Even well-off families started leaving their homes after taking their share, leaving the banking investors, small investors and lenders with a bunch of worthless properties. There was no more selling and buying of real estate in the market now as everyone knew it was useless. As every sector of the economy is deeply interconnected, the whole economy froze.

Companies like Lehman Brothers started filing for bankruptcy. Bear Stearns went out of cash. The stock market was on a bear run. The people had not seen the stock market steep so low in decades. People were thrown out of their offices in the peak hours of the day as their companies were no longer able to pay them. The so-called stock market experts were roaming on streets with their box of office essentials, which was now worthless.

The vast floors of Morgan Stanley and Goldmann Sachs, which used to trade billions of dollars a day, were now empty. The United States was no longer able to trade with other countries and the whole globe went into a recession that was never seen or expected in decades. 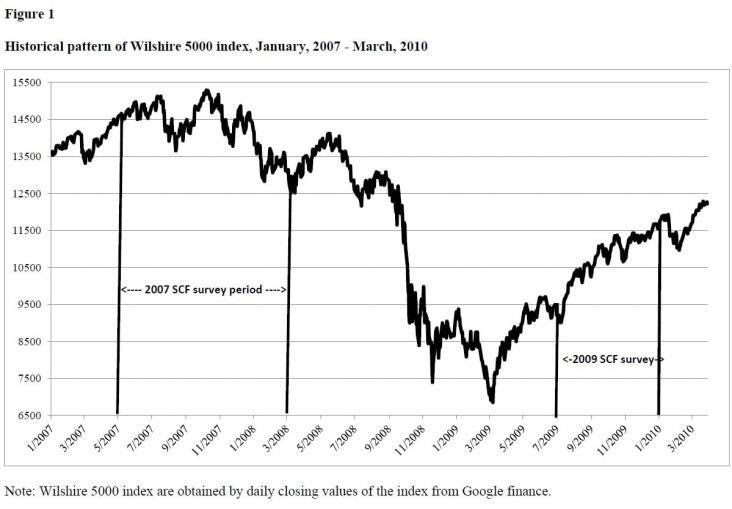 And that was just in The USA.

In the post-crisis world, the government and the Fed should have taken responsibility for all the chaos and sent the gold plated corrupt bankers to jail. But nothing like this remotely happened. Instead, the so-called intellectuals blamed the small business people, laborers and employees as they always do.

The Fed and treasury department of The USA are still governed by the ones who were the crisis architects. The system never improved and the same things went on, only a bit modified to show everyone that they have changed.

Many major businesses in the globalized world are still void and it’s a bitter truth because that’s how the modern economies work. We may never know how many bubbles the global economy is having and how many of them have burst by the Covid-19 Crisis. We need to be aware of the lies in the market to keep our mind and soul together in times of these crises.