You can skip the 1st para if you have came for the sole purpose of exploring the topic. CEV publishes its authentic blogs mainly to discuss the important topics, phenomenon, and scientific theories to spread a sense of wonders and appreciation for the feats of heroes of science. Our formal education lacks the element of astounding a student, and instead just focus on swallowing such beautiful phenomena without tasting them, we are trying to hammer that.

Come on a journey to experience the wonders of nature.

So firstly let me set the aura for the blog.

Different matter (elements) on earth exists in such states, for example water in the liquid state, which is rarest in till now explored part of the universe by humans. It is only here, where matter has groomed to consciousness.

Water is one of the forms of matter whose role in sustaining life on earth is ineffable. H2O shows a very flexible behavior in the conditions produced at earth. It can boil to vapour state, freeze to solid state and flow in the liquid state. In winters the water froze to ice, and it starts floating. Whereas for any other element the solid is denser than liquid. This strange behavior creates an insulation layer on top and keeps most of the water in water bodies unfrozen, thereby sustaining aquatic life. In summers it evaporates and condenses to form clouds and fall back as rain, another life-sustaining behavior. Change of state of water is such an important phenomenon. Cavitation is just one aspect of it.

Cavitation is like boiling but the method is different, more technically the thermodynamical path followed is different. 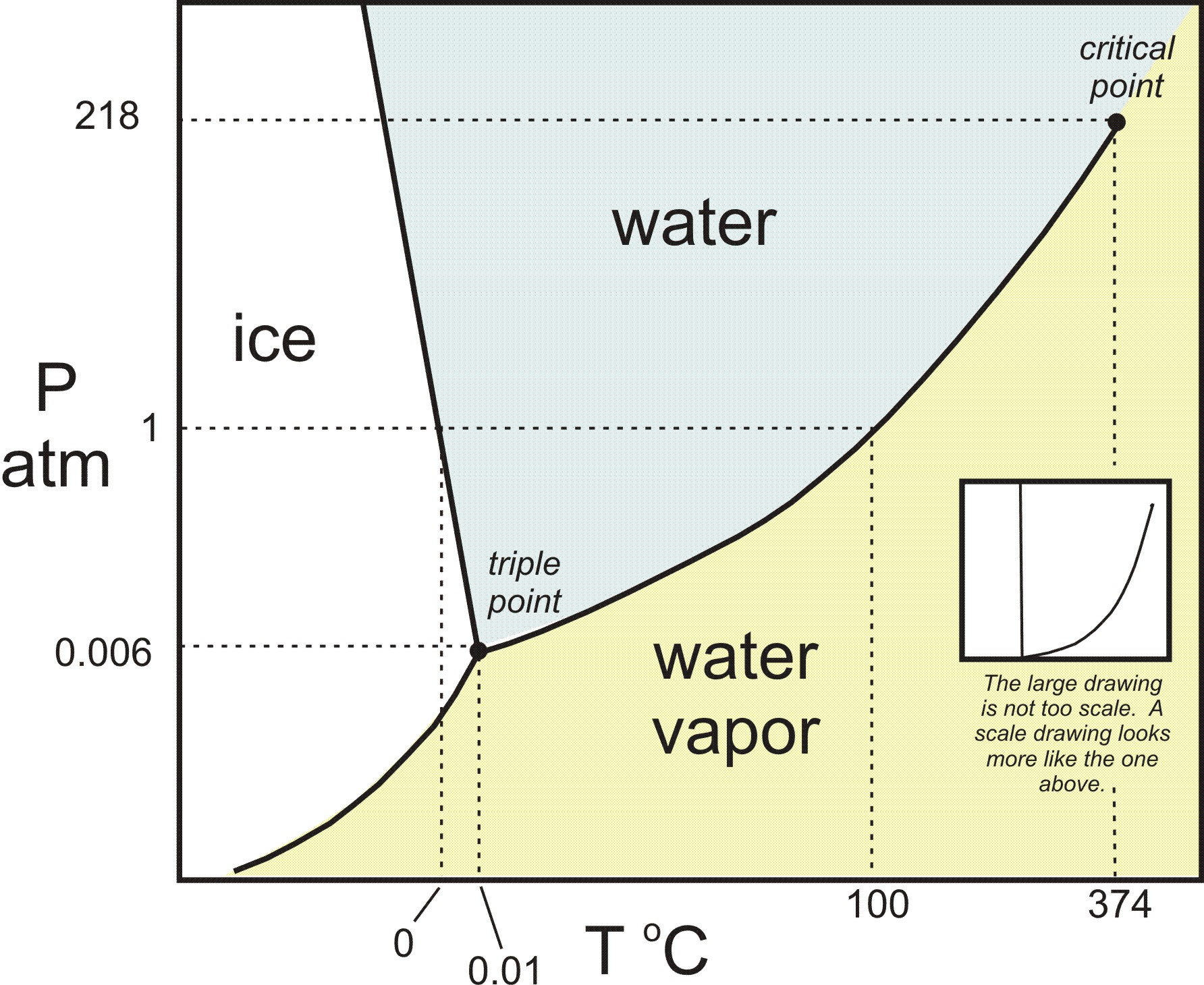 Consider this graph, water can change state from liquid to vapour either by moving horizontally by increasing temperature (boiling) or by moving vertically down by lowering external pressure (cavitation), a variety of reasons can cause this the drop in pressure in water.

“Cavitation is a phenomenon in which liquid burst to vapors inside the bulk of the liquid due to a sudden drop in pressure below the vapour pressure.”

First, let’s have a general discussion which will subsequently lead us to advanced topics.

Once the bubbles are generated soon they travel to higher pressure region and collapse back to a liquid form. Obviously, the energy equivalent to the latent heat of vaporization will be released. Now, this energy may take the various form of energy, the form of shock waves in water, sometimes heat, sometimes even the light!

Since the phenomenon is concerned with fluid so it becomes extremely essential for mechanical and civil engineers to talk about the effects of cavitation in fluid transportation. The pumps, propellers, valves, engines, spillways, etc all of these have to suffer wear and tear due to cavitation. Let’s see the limits.

As far as general events are considered cavitation doesn’t seem to be desirable:

In propellors and pumps, the shock waves produced by the cavitating bubbles cause the material to lose its hardness and soon degrade due to continuous explosions. Also, the formation of bubbles in pumps reduce the efficiency. The crackling sound of collapsing causes the submarines more vulnerable to be detected by enemies.

In spillways of dams and canals, the irregularities present on the surface may cause a pressure drop in irregularity at a high fluid velocity hence forming cavitating bubbles which might travel downstream and cause possible damage to even concrete.

Diesel engines are also found to get damaged by the cavitation in some way.

This series of damaging effects of cavitation are not continued in every case, we have employed cavitation for benefits also.

You would be surprised to know about the scope of cavitation in nature, here are the most amazing applications.

TREES AND PLANTS: It is the difference in pressure in xylem due to which the water rises from roots to leaves. Sometimes the pressure drop goes below the atmospheric pressure hence the liquid burst into vapour. As the plants try to dissolve the vapour, the conversion back to liquid comes with a shock wave, which damage the plants conducting tissues.  This is the explanation the audible sound in some trees in summers when the transpiration rate is highest. Here is a beautiful video to understand more better-

LIFE IN OCEAN: Well animal kingdom in the ocean is also affected by cavitation. The upper limit of the speed, the sharks, tuna and other life can travel is limited by this phenomenon. Basically, the high speed causes a huge pressure drop in the area behind fins and tail, sometimes pressure is dropped below the atmospheric level that water blast into vapour, and soon normal pressure cause bubbles to collapse to liquid, this reversal cause a painful event for them and limits them. Still, a speed range of 50-110 Kmph is achieved, as some of them have evolved fins without nerve-endings like tuna, still evidence of damage by cavitation can be seen on their fins.

Life is the most wonderful event in the universe. Just imagine life is nothing but matter groomed to consciousness!!!! You know piston shrimps are so advance that they employ shock waves to kill prey. The shrimps use a pair of clamping outgrowth to bash at a colliding speed of 115 Kmph. The small area of the jet of water that moves ahead at speed around 97 Kmph and creates a pressure of 80 kPa at 4 cm from shrimp, leaving behind pressure less than that of vapour pressure, hence causing bubbles. This bubble immediately collapses due to the surrounding pressure. Small area and fraction of time cause very high energy density, the implosion causes the temperature of water to reach limits of 4700 degree Celsius (and you know surface temperature of the sun is around 5500 degree). This gives a coup de grace to the prey, no chance to escape from death. Witness the event in this short video-

Time has come to move to advanced topics in which someone might do research in.

We discussed that the light is a possible form of energy that can be released by the cavitating bubble. This phenomenon of production of photons is called as sonoluminescence. This transduction of sound into light cannot be described fully by the present-day equations of fluid dynamics, and thus pushes fluid dynamics beyond its limits. 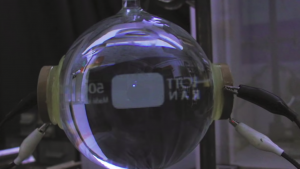 The mechanics of the process is uncertain, but event description can be given. So a bubble inside a liquid behaves differently when subject to different acoustic waves. At a particular frequency in the ultrasonic range, the gas bubble can collapse to emit a burst of light. The expansion and collapse of the bubble can be made periodic using a particular frequency and constant amount of light emission can be achieved. 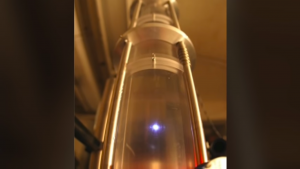 When a bubble is collapsing the acceleration of surface is great, the pressure inside the bubble keep on increasing and so the temperature. Theories say that the temperature goes so high that the gas inside the bubble ionize to form the plasma and hence charge particle produce light (in single bubble cavitation it ranges to 20,000 K). Physicists describe this phenomenon as ” a star in a jar”!

A simulated view of supercavitating torpedo: 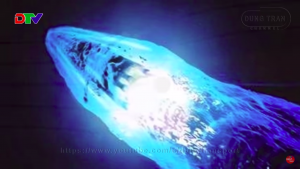 Russia VA-111 Shkval used diverting some of the hot exhaust to the nose to evaporate the water and form a bubble. (notice the nose) Hope some of you may get vision slight more clear in the direction to select your field of research after reading the blog.