COLOR is the characteristic of human visual perception described through color categories, with names such as red, orange, yellow, blue, green or purple.

Color is all around us. It is a sensation that adds excitement and emotion to our lives.

But what actually a color is??

If it is a human perception then do everyone see different color??

Do everything has a constant color??

There are two things responsible for color:

Color is basically due to reflection and absorption phenomenon. That is absorption and reflection of light. What we see white light is a combination of seven colors.

So all colors are light or all lights are color??

Colors are only the light lying in the visible spectrum or light ranging from wavelength approximately 380 nm to 710 nm.

COLOR OF A OBJECT

When a light arrives at a opaque surface it is either reflected, scattered or  absorbed. Surfaces that reflects light of different wavelengths with different efficiencies look like mirrors tinted with colors determined by those differences. Surfaces that scatters light determine their color by wavelength light scattered. Surfaces that absorbs all the light coming to it appears to be black. Object that transmits lights are either translucent or transparent depending upon level of scattering.

Objects may emit light that are generated from excited electrons. Electrons get exited due to some chemical reactions, temperature elevation, or by absorption of frequencies which results in emission of light and is colored if their wavelength lies in visible region.

For the question If it is a human perception then do everyone see different color??

The answer is yes. That is the reason why some people have color blindness of different colors. It is combined action of the eye and brain that we percept a color.

The colors that we see are due to three types of specialized cells in our eye,these are known as CONES. 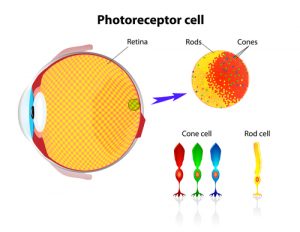 Light receptors within the eye transmit messages to the brain, which produces the familiar sensations of color. Cones are concentrated in the middle of the retina, with fewer on the periphery. There are more than 6 million cones in one eye that transmits the higher levels of light intensity that create the sensation of color and visual sharpness. The three types of cone-shaped cells, each sensitive to the long, medium or short wavelengths of light. These cells, working in combination with connecting nerve cells, give the brain enough information to interpret and name colors.

About 8% of men and 1% of women have some form of color impairment. Most people with color deficiencies aren’t aware that the colors they perceive as identical appear different to other people. Most still perceive color, but certain colors are transmitted to the brain differently.

The most common impairment is red and green dichromatism which causes red and green to appear indistinguishable. Other impairments affect other color pairs. People with total color blindness are very rare.

10% of males   who’d be unable to read the three twelves and twenty-nines in the circles, below. 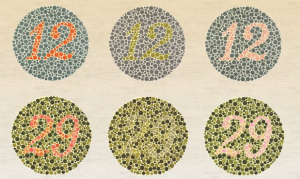 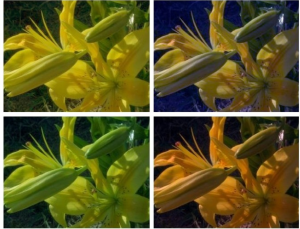 Do everything has a constant color??

Well answer to this question is still uncertain and is mechanism are still largely unknown.  Color constancy is our ability to perceive constant surface colors despite changes in illumination.

across light sources. One common path, which is now believed not to mimic the human visual system, but is very common among computational models, approaches the problem using two phases. First, based on several assumptions, the color of the light source is estimated from an input image i.e. the image already in your brain.

Then using this estimated illuminant, the input image is corrected so that it appears to be taken under a canonical (e.g. white) light source.

ARE WHITE AND BLACK COLORS??

According to physics, color are those which lie in the visible spectrum i.e. whose wavelength ranges from 380 nm to 710 nm, accordingly white and black should not be colors. Black is absorption of all lights and white is reflection of all lights. But if we include in the definition of color, however, all of the ways in which human eyes process light and the lack of it, then black and white are colors. But this is still a debatable topic for scientists.

Then from where a cryon box contains white and black colors?

That are actually false colors, formed from some kind of pigment.

World could not be imagined without color. Color give colors to lives. Black may be a color or not but everyone loves it.