Well, I feel very excited to discuss something very phenomenal.

If you think about the electrical power system you can easily imagine the whole system running in mind.

    The turbines rotated by some prime movers like steam or water. The generators produce electricity on the basis of a few great laws of Electromagnetism. Then, voltage is step up by transformers to compensate for heat loss in long transmission lines, then stepping down the voltage for distribution to the dear consumers. This is all most of us think to happen in this system. Simple and sweet.

But I want you to see a bigger, panoramic and a stunning picture of this modern marvel. I want you to get astounded by the problems and constraints they face and more importantly the principles and techniques they use to solve them. I have tried to keep the blog as general as possible because we, electrical engineers, don’t want to be not understood by society and also not want to be trivialized compared to other breeds!

The stage has been set and possibly now I would have been able to create a vacuum in your mind to suck the upcoming.

So let’s start by addressing a few very fundamental questions, not as simple as why we use electrical energy so widely.

Why we use AC or DC in particular cases?

AC and DC systems have their own advantages and disadvantages. The most satisfying ability of the AC system is to simply and efficiently step up and step down voltages to get low currents for minimal resistive heat dissipation in hundreds of km of long transmission lines. Whereas they are subject to more difficulties in maintaining constant phases, RMS values of power, voltage, and current.

DC system is very immune to fluctuations in currents, voltage, and phase angles unlike in AC. Most of the devices utilize DC like semiconductor devices, etc. But DC system requires sophisticated electronics for voltage step and step down.

Hence, national power grids have no option than to supply with high voltage AC power.

Will discuss the answer to this question in the next blog of this series, you can comment if you know.

So now it is clear that the transmission system uses 3 phase high voltage AC for transmission.

Let’s dive deeper and consider more typical technical issues. And the good power quality is certainly the first deserving topic to be talked upon.

There are three aspects that mark good power quality:

It is surprising that the load itself is the factor that largely determines the quality of power. For the three factors, we will follow a simple “for loop”-

It is very important to keep the fluctuation of peak or RMS value of voltage within the range. The consumer end sees various types of variations:

c.) Spikes: also called surges are a brief change in voltage for a small time period.

e.) Overvoltage: when the voltage increase significantly (~90%) for the time period > 1 min.

We know that every load that we connect to the supply, it gets connected in parallel to the grid. And obviously, resistance in parallel always causes a lowered equivalent resistance. So every time we connect anything to supply the power station at the end sees a drop in the total resistance of grid and thus the current in circuit increases as voltage have to be maintained constant. If more and more people connect appliances to grid the equivalent resistance would go on decreasing and consequently due to high currents the system is declared overloaded.

So I hope you would have found an answer to why undervoltage occur in peak consumption time.

In case if not then here is the explanation:

In parallel circuits like that of the grid, overvoltage can only occur when the circuit is supplied by some other source itself. Yes, you are right, lightning is the major contributor. 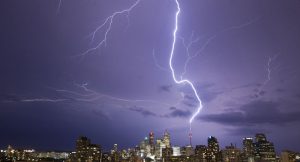 a.) Both of faults under/over voltage causes the machine to run inefficiently. Other effects include noisy operation, insulation breakdown, and lead to severe damage and lowered a lifetime of various machines.

b.) Flickering: random and frequent spikes in voltage causes a visible flickering in lighting equipment. Also, the devices that require constant power like T.V sets, telecommunication equipment, and other industrial processes are adversely affected by these voltage fluctuations.

In all power generation units, the generator used for generation is AC synchronous type. They are rotated by some prime mover (water/steam) at given synchronous speed to produce the voltage of a specified frequency. There are numerous factors that disturb the frequency to remain constant.

Frequency is a major factor in determining the performance of many AC devices. The system is required to maintain frequency in a range of -+2.5% of specified frequency (50 Hz in India).

There are several reasons for the frequency variation.

As we saw that load applied in parallel to the grid reduces effective resistance, hence an increase in current. The increased current in the secondary side of distribution transformers is responded by an increased in primary as well.  Well, in the same manner, the effect reaches the alternators in the power station, where the current in stator increases which in turn exerts a greater force on the rotor to slow it down. Remember the frequency is greatly dependent on the RPM of rotors. The water or steam is adjusted accordingly to keep up the rotor speed.

The thermal power stations are slow at the response, whereas nuclear and hydroelectric power plants have a more rapid response to the load variations.

a.)  Suppose we lose a large load suddenly, the rotor speed would respond by an increase in rotational speed, frequency of voltage at the alternator terminals increases until the prime mover is adjusted by delivering less mechanical power.

b.) In case of a sudden large rise in load on the grid, the rotor of alternator would immediately slow down due to high current, hence it generates voltage of lower frequencies. The prime mover is in this case adjusted by increasing mechanical power availability.

a.) It affects the stability of the overall system.

b.) In these days all the regional grids are connected to each other, hence all alternators need to run close to specified frequency for efficient power distribution.

Frequency variation and waveform distortion are closely related to each other, let’s see how.

Waveforms of two parameters are considered:

a.) Current Waveform distortion: a current waveform in a load is said to be distorted if it doesn’t resemble a pure sine wave. And sadly there are a whole lot of devices in the modern world in which load a no sense resemble a sine/cosine wave.

b.) Voltage Waveform distortion: in cases when the distorted current waveform is comparatively large, it makes the voltage waveforms across the load also different from a pure sine wave.

When all the distorted waves are taken into account the resultant waveform of current and voltage at the distribution transformer or at the power station is highly distorted from a sine wave.

When we carry out a mathematical analysis of waveform distortion using Fourier analysis we get to know that the distorted waveform in load is resultant of numerous pure sine waveforms of different frequencies which are multiples of fundamental source frequency (50 Hz). We call them HARMONICS. Among all the harmonics the third harmonic is of greatest concern. 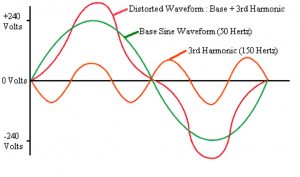 The distortion is a major growing concern these days due to increasing heavy non-linear loads.

a.) Regular operational difficulties like humming, heating, low efficiency, torque pulsation in motors are caused due to waveform distortion.

b.) More severe effects include a very low power factor due to current distortion. So, let’s first understand the POWER FACTOR!

WHAT EXACTLY IS POWER FACTOR?

Any force does maximum work in a given time when its direction is along the velocity, consider an electron, it will experience a force in the electric field, now due to any reason if this field is not along its velocity than a factor of cos (theta) will arise where theta is an angle between velocity and field lines.

In the case of AC both electric field and current oscillate, so if they are not in synchronization than only a component of force (voltage) will do useful work. For example, consider a swing system. Your pushing and pulling are in sync with the swing motion, if this is not then you can not deliver efficiently.

This is what gives rise to power factor that considers what is technically called phase relationship between voltage and current.

If the power factor is small then you need more current to supply the same power to your device.

Now we are aware of problems quite well and its time to tackle them smartly.

The length of the blog will become considerably large and it will also lose its readability. Hence, the impact and the solutions would be discussed in part 2 of the blog.