Can you imagine the world without plastic?

The controversy over the use of plastic has been an essential issue more than decades. However, though most of people know using plastic products like water bottles, polythene, cutlery etc is deleterious to our environment, unfortunately, it is still more convenient to buy a plastic container. Nevertheless, wastes generated from producing plastics are definitely over the expectation. Producing plastic is one of the major adversaries of Earth.

50% of plastic is used once and then thrown away so I feel there is an urgent need to find ways to replace some of the unreal amount of plastic we make, use and throw away each day. The BPA (Bisphenol-A) substance can make it hazardous to human health. It also involves energy-intensive processes that use a lot of raw materials. Polyesters like PET can be broken down through hydrolytic degradation and the ester linkage can be cut by a water molecule, but this reaction proceed differently in case of acidic or alcoholic condition under temperature 200-300 °C. Based on this PET is considered as non-biodegradable material which will take more time to decompose such as 450 years. According to the National Association for PET Container Resources, the recycling rate for PET has held steady at 31%.

With the advancement in the technology, researchers have now come up with an edible water bottle (water ball) which has capability to set an end to plastic packaging requirements. A water ball is new way of packaging a liquid, say water, that proposes an alternative to the plastic bottle. The edible or consumable water bottle is a blob or drop-like water container which is made from sodium alginate gel. The biodegradable blob is created to make a more environmentally friendly alternative to plastic bottles. The water ball encloses a small volume of water in a membrane which is made from brown algae and calcium chloride.

The water ball is prepared by dropping ice (frozen liquid) into separate solutions of calcium chloride and brown algae and membrane form around it. This process is called as spherification process. The technique of spherification, of shaping a liquid into spheres which visually and texturally resemble caviar born in 1946 is disclosed in US Patent 2403547. Using the culinary technique of spherification, the water is enclosed in a double jellylike membrane. The technique consists into apply sodium alginate (E-401) which is natural product of the brown algae and calcium chloride (E-509) in a concrete proportion in order to generate a jellification on the peripheral of the liquid. Calcium deposited on the membrane creates hardened membrane, and hard shell in the manner of an egg shell. The final package is simple, cheap resistant, hygienic, biodegradable and even eatable. The edible water ball is tasteless, although flavours can be added to it. 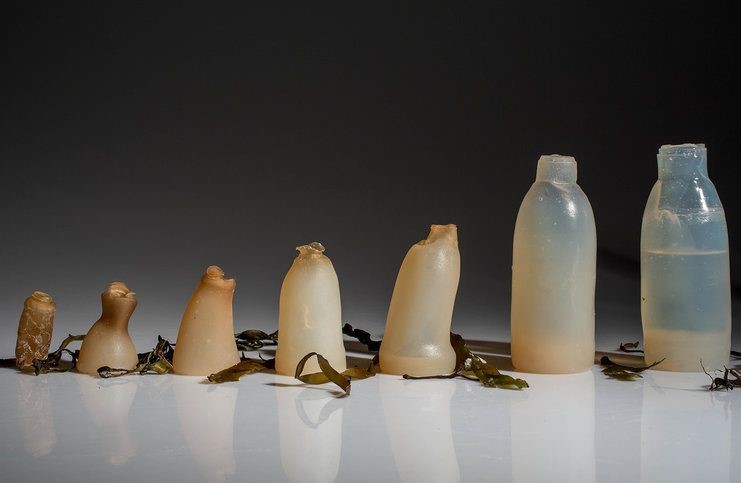 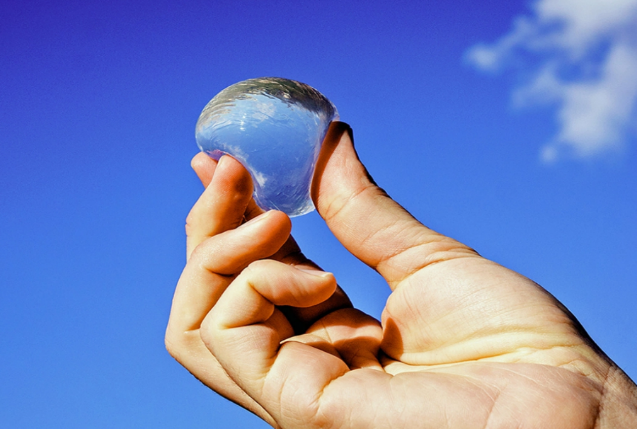 A seaweed-tech start-up based in London Skipping Rocks Lab has actually implemented this concept and come up with a bio-degradable, edible water bottle (water ball) and the ball is named as “Ooho“. The water ball is a spherical packaging made of seaweed, entirely natural and biodegradable. The edible container can be consumed directly. A layer of edible container can be unwrapped off to keep the peripheral clean for consumption. The water ball will replace millions of plastic bottles thrown away every year.

Chemicals such as bisphenol A and pthalates leaching into food and drinks. Among all the other plastic substances that get into our food, BPA stands out for its ability to disrupt the functions of hormones- especially estrogen. Pthalates have also been known for causing reproductive problems for men.

The interesting over here is not the facts about the harm of plastic leaching into food, it’s the fact that we all are aware of this but are not taking any action. 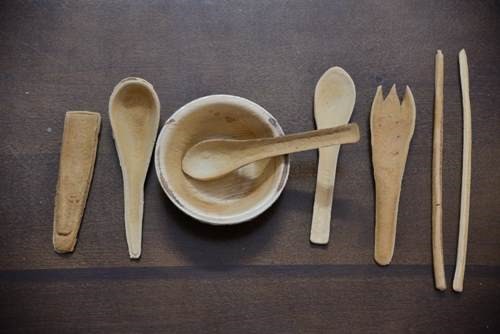 You can have the spoon and eat it too! The spoon is just not edible but also nutritious. Edible cutlery offers an interesting alternative to the non-biodegradable plastic ones. “Sale of plastic cutlery, growing at a rate of about 30 per cent, is generating significant non-biodegradable waste and contributing to overflowing landfills. Edible cutlery is the only solution that provides the same convenience of disposable forks, spoons and chopsticks,” says Narayana Peesapaty, managing director of the Hyderabad-based start-up BK Environmental Innovations Private Limited, which developed edible cutlery by baking a mix of sorghum (jowar), rice and wheat flour. A splash of colour is added to the cutlery by including spinach (green), beet root (red) or carrot (orange) pulp to the product mix.

Although, a need of lot of research is required in this field. There are people out there making efforts to lessen plastic’s detrimental effects on the environment. Above here are just few ideas that give us hope for a plastic-free future.

There is a huge realization today that we are damaging our planet in many ways, plastic being a main culprit. More and more efforts are being made by eco-conscious individuals and scientists to find alternatives. Anyone can easily create the difference and chances and the others will follow along.

“Plastic is ubiquitous in modern society and seemingly unavoidable. But is it worth risking the lives of marine species, the health of the oceans and our own future in the name of convenience? By taking steps to minimize everyday plastics in our lives, we can crush plastic at the source and give marine life a fighting chance,” said Nil Zacharias, Co-Founder and Editor-in-Chief of One Green Planet.

If we all try to identify where we use plastic and actively look for alternatives, we can drastically cut down on the amount of plastic pollution that finds its way.

You can also join hands to create a plastic free world for our succeeding generations.