The specific properties of bucky paper depends upon arrangement of CNTs . These properties include :

By adding the resin and the hardener to the buckypaper and then curing it in a specific temperature and pressure, the buckypaper composite will be produced. 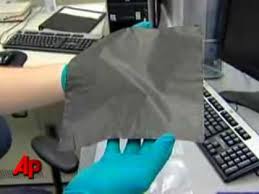 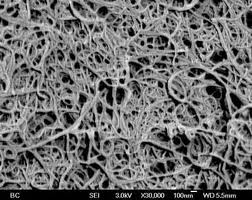 Now before going in detail about bucky let us talk about its building block –CNT . We will learn what it is , its types , its preparation methods and properties.

Carbon is having 3 forms of allotropes: graphite, diamond and fullerene, and if we talk about graphene it has two dimensional hexagonal sheets one above the other. 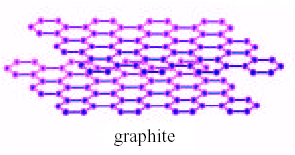 So if we roll  that two dimensional sheet we get CNT is a tubular form  with diameter as small as 1nm and length in few nm to microns. 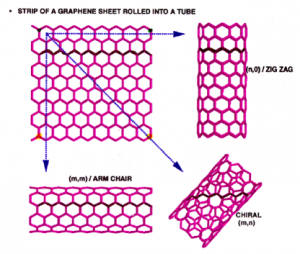 The way that graphene is rolled up drastically change physical properties and we get different types of nanotubes.

Ɵ is Chiral Angle with respect to the zigzag axis and a1, a2 are chiral vectors.

The coefficients n, m define what kind of nanotube it is. For e.g 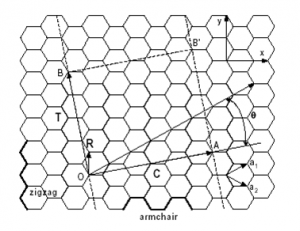 and under some conditions such as n-m =3r where r= 0,1,2..we get metallic nanotubes otherwise semiconducting nanotubes. 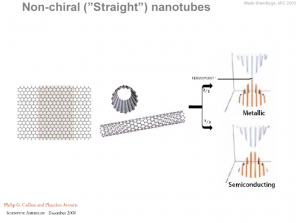 So we can say that- The values of n and m determine the chirality, or “twist” of the nanotube. The chirality in turn affects the conductance of the nanotube, it’s density, it’s lattice structure, and other properties. A SWNT is considered metallic if the value n – m is divisible by three. Otherwise, the nanotube is semiconducting. Consequently, when tubes are formed with random values of n and m, we would expect that two-thirds of nanotubes would be semi-conducting, while the other third would be metallic.

As CNT is a thin two dimensional graphene sheet we will first learn how this grapheme layer is prepared. The simplest method to produce  graphene layer is chemical method.

1)Take graphite powder cooked it in acid (cons H2SO4) with an oxidizing agent (cons  HNO3), thus will give graphite oxide.

2) Graphite oxide will then reduced to give graphene.

3) now this graphene is in solution form , put this solution on any substrate we get graphene layer. 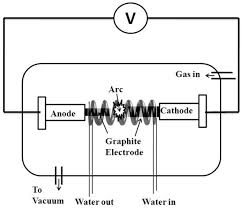 This is the most common and perhaps easiest way to produce carbon nanotubes as it is rather simple to undertake. In this method two carbon rods placed end to end, separated by approximately 1mm, in an enclosure that is usually filled with inert gas (helium, argon) at low pressure (between 50 and 700 mbar) as shown in Figure 4. A direct current of 50 to 100 A driven by approximately 20 V creates a high temperature (~4000K) discharge between the two electrodes. The discharge vaporizes one of the carbon rods (anode) and forms a small rod shaped deposit on the other rod (cathode).

In short we can say that here we have a chamber in which substrate + catalyst is present and gas(carbon source) comes in and there will be:

Application:  the high stiffness and strength combined with low density implies that nanotubes could serve as ideal reinforcement in composite materials and provide them great potential in applications such as aerospace and other military applications.

Application: thermal management applications, either as “heat pipes” or as an alternative to metallic addition to low thermal conductive materials,heat sinks that would allow computers and other electronic equipment to disperse heat more efficiently than is currently possible

Now we have CNT’s ready with us in both forms SWCNT’s and MWCNT’s. We have to put these nanotubes in some desired fashion to form bucky paper,figure shown below clearly explains the procedure to do it: 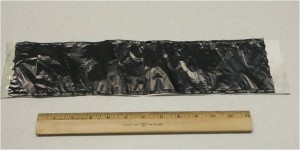 This is just the basics of bucky paper or CNT, if someone have to study in detail their is an excellent video  lecture from Prof C.N.R Rao, check it :