The picture depicts what Augmented Reality can be like!!!

What would you do in a foreign place whose native language you don’t know? How would you read the signs? Would you feel worried?

Well, you don’t have to worry. With Google Translate’s new AR function, you can easily scan text using your phone’s camera and have it translated in any language. Cool right, but hold on what is AR?

How does it work?

What are its applications?

Just relax and read on to find out everything you need to know about this cool technology.

So let’s get started with the definitions… 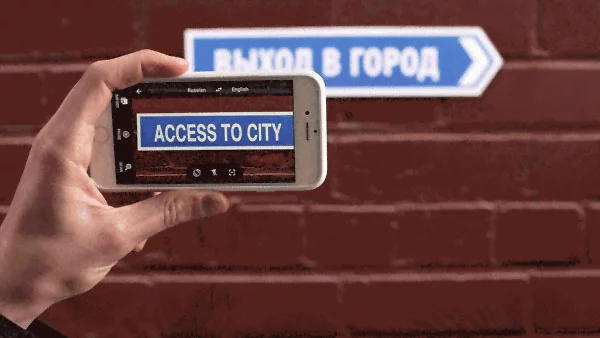 WHAT IS AUGMENTED REALITY (AR)?

According to a dictionary, to augment something means to make it more effective by adding something to it.

Moving onto a technical definition, augmented reality is the technology that enhances our physical world by superimposing computer-generated perceptible information on the environment of a user in real-time.

This integrated information may be perceived by one or more senses and enhances one’s current perception of reality with dazzling visuals, interactive graphics, amazing sounds and much more. (Exciting!)

You must have played the popular AR game Pokemon GO which revolutionized the gaming industry and is a huge success making 2 million dollars per day even now. Pokemon GO uses a smartphone’s GPS to determine the user’s location. The phone’s camera scans the surroundings and digitally superimposes the fictional characters of the game with the real environment.

I KNOW ABOUT VIRTUAL REALITY…HOW IS IT DIFFERENT?

Augmented reality is often confused with virtual reality. Although both these technologies offer enhanced or enriched experiences and change the way we perceive our environment, they are different from each other.

A virtual reality headset uses one or two screens that are held close to one’s face and viewed through lenses. It then uses various sensors in order to track the user’s head and potentially their body as they move through space. Using this information, it renders the appropriate images to create an illusion that the user is navigating a completely different environment.

Augmented reality on the other hand, usually uses either glasses or a pass-through camera so that the user can see the physical environment around them in real-time. Digital information is then projected onto the glass or shown on the screen on top of the camera feed.

WHERE DID IT ALL START?

In 1968, Ivan Sutherland, a Harvard professor created “The Sword of Damocles” with his student, Bob Sproull. The Sword of Damocles is a head-mounted display that hung from the ceiling where the user would experience computer graphics, which made them feel as if they

were in an alternate reality.

In 1990, the term “Augmented Reality” was coined for the first time by a Boeing researcher named Tom Caudell.

In 1992, Louis Rosenburg from the USAF Armstrong’s Research Lab created the first real operational augmented reality system named Virtual Fixtures which is a robotic system that places information on the workers’ work environment to increase efficiency similar to what AR systems do today.

The technology has progressed significantly since then. (Now keeping aside the further details in history so that you don’t get bored!)

For details of history and development of augmented reality, check out the link given below.

It produces the 3D image of the object detected by the camera when the camera is scanned over a visual marker such as QR code. This enables a user to view the object from various angles.

This technology uses location tracking features in smartphones. This method works by reading data from the mobile’s GPS, digital compass and accelerometer to provide data based on users location and is quite useful for travellers.

If you are thinking that this technology has something to do with projection, then kudos you are absolutely correct! This technology projects artificial light onto surfaces. Users can then interact with projected light. The application recognizes and senses the human touch by the altered projection (the shadow).

As the name suggests, this AR provides a full or partial replacement of the object in focus by replacing it with an augmented view of the same object. Object recognition plays a vital role in this type of AR.

HOW DOES AR WORK?

Now that you know something about AR, your technical minds must be wondering how the technology works. Here is a brief technical explanation of the supercool technology.

AR is achieved by overlaying the synthetic light over natural light, which is done by projecting the image over a pair of see-through glasses, which allow the images and interactive virtual objects to form a layer on top of the user’s view of reality. Computer vision enhances the reality for users in real-time.

Augmented Reality can be displayed on several devices, including screens or monitors or handheld devices or smartphones or glasses. It involves technologies like S.L.A.M. (simultaneous localization and mapping) which enables it to recognize 3D objects and track physical location to overlay augmented content, depth tracking (briefly, a sensor data calculating the real-time distance to the target object). AR has the following components:

They are usually on the outside of the augmented reality device. A sensor collects information about a user’s real-world interactions and a camera visually scans the user’s surroundings to gather data about it and communicates it for processing. The device takes this information, which determines where surrounding physical objects are located, and then formulates the desired 3D model. For example, Microsoft Hololens uses specific cameras to perform specific duties, such as depth sensing. Megapixel cameras in common smartphones can also capture the information required for processing.

Augmented reality devices basically act like mini-supercomputers which require significant computer processing power and utilize many of the same components that our smartphones do. These components include a CPU, a GPU, flash memory, RAM, Bluetooth/Wifi, global positioning system (GPS) microchip, etc. Advanced augmented reality devices, such as the Microsoft Hololens utilize an accelerometer to measure the speed, a gyroscope to measure the tilt and orientation, and a magnetometer to function as a compass to provide for a truly immersive experience.

This refers to a miniature projector found on wearable augmented reality headsets. The projector can turn any real surface into an interactive environment. As mentioned earlier, the data taken in by the camera is used to examine the surrounding world, is processed further and the digital information is then projected onto a surface in front of the user; which includes a wrist, a wall, or any other person. The use of projections in AR is still in the developing stage. With further developments in the future, playing a board game might be possible on a table without the use of a smartphone.

Augmented reality devices have mirrors to assist your eyes to view the virtual image. Some AR devices have “an array of many small curved mirrors”, others have a simple double-sided mirror to reflect light to the camera and the user’s eye. In the case of Microsoft Hololens, the use of “mirrors” involves holographic lenses that use an optical projection system to beam holograms into your eyes. A so-called light engine emits the light towards two separate lenses, which consists of three layers of glass of three different primary colours. The light hits these layers and enters the eye at specific angles, intensities, and colours, producing the final image on the retina.

AR is still in the developing stage yet it has found applications in several fields from simple gaming to really important fields like medicine and military. Here are some of the current applications of AR (the list is not exhaustive).

The gaming industry is evolving at an unprecedented rate. Developers all over the world are thinking of new ideas, strategies and methods to design and develop games to attract gamers all across the globe. There are a wide variety of AR games available in the market ranging from simple AR indoor board games to advanced games which could include the players jumping from tables to sofas to roads. AR games such as Pokemon Go have set a benchmark in the gaming industry. Such games expand the field of gaming as they attract gamers who easily develop an interest in games that involve interaction with their real-time environment.

AR has seen huge growth in the advertising sector over the past few years and is becoming popular among advertisers who are trying to increase their customers by making engaging ads with AR.  Buyers tend to retain information conveyed through virtual ads. AR ads provide an enjoyable 3D experience to users which gives them a better feel of the product. For example, the IKEA Place app lets customers see exactly how furniture items would look and fit in their homes. AR ads establish a connection between the consumer and brand through real-time interaction due to which consumers are more likely to buy a product. Many researchers believe that AR is similar to other digital technologies however its interactive features set it apart from other technologies.

Classroom teaching is rapidly undergoing changes. With the introduction of AR in traditional classrooms, boring lectures can become extremely interesting! Students can easily understand complex concepts and remember information better as it is easier to retain information from audio and visual stimulation compared to traditional textbooks. Today teens are increasingly owning smartphones and other electronic gadgets that they use for playing games and using social media, then why not use AR in the field of education! AR provides an interactive and engaging platform that makes the learning process enjoyable. With the development of AR, not just classroom teaching but distance learning can become more efficient giving students greater insights into the subjects they study. Google Translate now uses an augmented reality function with which students can use the camera to take a picture of the text and have it translated in real-time.

Augmented reality can help doctors to diagnose the symptoms accurately and cure diseases effectively. It is helpful to surgeons performing invasive surgeries involving complex procedures. Surgeons can detect and understand the problems in bones, muscles and internal organs of the patients and decide accordingly which medication or injection would best suit the patient. For example, AccuVein is a very useful Augmented reality application used to locate veins.  In emergency operations, surgeons can save time with the use of smart glasses which can give instant access to the patients’ medical information, surgeons need not shift their attention to anything else in the operation theatre. Medical students can get practical knowledge of all parts of the human body without having to cut it.

WHAT’S IN THERE FOR THE FUTURE?

AR has captured our imagination like none other technology. From being something seen in science fiction films to something that has become an integral part of our lives, It has come a long way and has gained success in many fields.

Ever since the introduction of AR-enabled smartphones, the number of smartphone users has increased. The fastest-growing technologies AI and ML can be combined with AR to enhance the experience of mobile users.

The augmented reality saw its record growth in 2018. AR is positioned to be strong among commercial support, with big tech names like Microsoft, Amazon, Apple, Facebook, and Google making heavy investments. It is expected that by 2023, the installed user base for AR-supporting products like mobile devices and smart glasses will surpass 2.5 billion people. Revenue for the industry should hit $75 billion. Industry players in the augmented reality world expect 2019 to be a year marked by a rapid increase in the pace of industrial growth.

The future of AR is bright and it is expected that its growth will increase further with more investments from big tech companies that are realizing the potential of AR.

That’s all for this blog!

Thanks for reading and I hope this blog gave you some new information and insights about augmented reality. Please give your valuable feedback.