“The system is designed to give ultimate plug and play convenience, seemingly as dependable as the sun rising in the morning.” – Thomas Overbye
The electrical power systems are among worlds largest machines yet it goes unnoticed everyday, and that marks its success.

If you just plugged in your laptop to socket in the wall then congrats you are now part of world’s third largest machine.

First of all thanks to the power system of India which has provided you with the required electrical energy to operate your machines to read this blog and me to write.

So, the Indian Power System, technically called the Indian Power Grid, is the third largest in terms of generation and consumption of electrical power in the world after China and the USA (in 2019). It has an installed capacity of 356.100 GW as on 31 March 2019, which in any case is not possible to visualise using common examples.

What does this statement actually mean?

It states that the national grid is capable of delivering 356.100 GJ of real electrical energy in one second. In the fiscal year 2017-18, a total of 1486.5 TWh generation was recorded on the grid, again no practical way for giving an analogy for equivalent energy.

In a country of 136.665 Million population, this gives rise to the average electrical energy consumption of 1149 KWh per capita per year. Though we ranked 3rd in power generation, but we ranked very low at gross electricity consumption (140 rank), whereas China stood far better ( close to 50) inspite being the most populated nation in the world.

Howsoever, this massive engineering system comprises of thousands of generators in hundreds of power plants across the landmass, delivering power through millions of miles of transmission and distribution lines to a hungry load of 1486.5TWh spreading over an area of 3.28 Million square Km.  NOT A CAKE WALK!!!!

In this blog, we will discuss in India’s perspective how does an electrical power system operate round the year to provide the customers in 29 states with reliable, secure, economic and quality power supply.

Let us grill the whole system into major components and understand it in a comprehensive way.

So the expectations and standards are quite high although they are not impractical because you can witness everyday occurring it, the irony is we fail to appreciate.

Reliability of the system allows customers to have continuous uninterrupted supply, in other words, minimal power cuts. So, how to make the system reliable.

One thing is for sure, various components will fail at some point or at least would go in servicing. It’s beyond our control to check the failure of system equipments completely. But to provide continuous power, the system should have a negligible impact even if a few major components collapse at a given time, else recovery should be very fast (which heavily depend on fault type).

Power system reliability comes from the heavily interconnected national grid. Numerous resources spread across the country are pooled into forming a common national grid, in which the power can be shared in all possible permutations and other resources can carry on even if some component fails.

So, sometimes when in summers the load is at the peak in North India a generator sitting in south India provide for the power at other time the very large economic generators in TPS in western and eastern India provide with power for major consumption.

Sooner or later you would come to know that the bigger a power system becomes greater is its reliability.

Power security allows customers to depend on the power system for his critical assets also. For example hospitals, sewage treatment plants, transport industry, nuclear power plant cooling system, laboratories, etc. Security assures a customer for the future availability of power so that he could depend on it.

Now how to introduce the concept of security in the power system? In other words, how can a power plant ensure supply in future?

This characteristic certainly requires the power system to be able to predict the load in future, then only

Cheap affordable power is also an important factor for the success of the power industry as the annual income of an Indian is 1,13000 per annum which is extremely low for leading a decent life. A common man thus doesn’t have enough to adjust the massive electric bills in his budget. And it is only the proper management of power generating resources across the nation to produce economic power. “HOW” is discussed in the upcoming section.

Power quality has three facets which we have already discussed in the blog named Electrical Power Quality.

We will discuss reliability and economic aspect in this blog and power security in next blog, LOAD DISPATCH CENTERS!!

Overview of the Power System 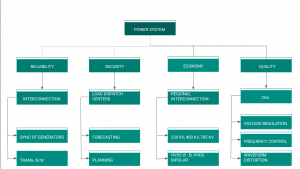 Till now you have at least come to you know the fact that reliability requires interconnection.

Let us understand the reason behind it.

We can get a gist of the concept of interconnection by a simple real-life example:

In a well planned and developed city, we see a web of roads, which gives a person numerous options to move from one starting point to any destination. In case a particular road becomes unavailable he can still reach his destination using other roads without any delay.

Similar is the case of the power system. Various parties pool their resources in such a way that failure of any major component of the system (let it be anything: power station, transmission line, or the distribution transformer itself) merely affect the system until it is again pulled back to work. The remaining healthy system is able to bear the load of the loss. Hence, in this way, we ensure reliability and consumer gets an uninterrupted continuous power supply.

Interconnection comes with many other essentials:

But pooling of resources in the power system doesn’t come so easy. There a whole lot of technical glitches and drawbacks, and it requires continuous sophisticated monitoring and control to keep the interconnected grid up.

The very first requirement of an interconnected system is that the generating horses (three-phase AC alternator) must run in synchronism with all the generators in the system. It is the same as all the engines pulling the whole train in one direction, not operating in synchronism is just as same as engines pulling coaches in the opposite direction.

We would further discuss later that the whole nation is now synchronised.

So, an alternator in the thermal power plant in Jamnagar, Gujarat is in synchronisation with a super thermal plant in Farraka, West Bengal, similarly, the nuclear power alternators in Kalepakkam is in synch with the TPS alternator at Rupnagar, Punjab.

You can refer for complete notes on paralleling of alternators below:

Once proper paralleling or synchronisation is done the power is now ready to flow in desired paths from the different power plants to hungry loads. Extra high voltage transmission lines carry the massive power from generating station to the distribution centres from where they are dispatched to the load areas.

This is the physics of the phenomenon, let’s move to the engineering.

The engineering aim of the electrical power system is to keep the grid up throughout the year. Now here comes the concept of roads, which we discussed earlier. We have to build a network of heavily interconnected lines through in such a way that power continues to flow even if some lines becomes faulty.

So let us directly take a worked out example: The western grid of India. 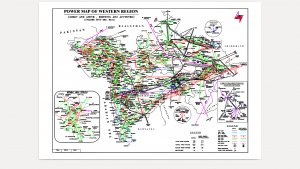 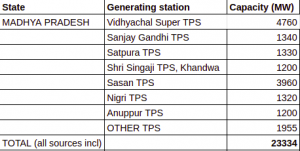 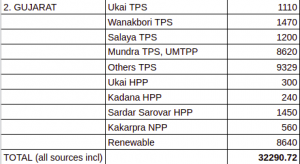 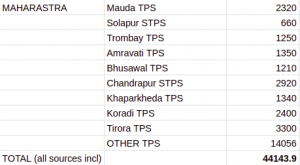 2. 400 kV lines: form three major evacuation corridors from the east side to the west side of the western grid

So the whole western grid which includes MP, Maharastra, Gujarat, Chhattisgarh, Goa, Daman & Diu is linked by AC as well as DC links and whole grid run in synchronism. We saw how the major load area of the region i.e. the west part see a net flow of power from the east side which have super power station like Vidhyachal and Korba but no major load centres.

The pooling of resources has bought self- sufficiency and synchronism keep the grid stable at an operating frequency of 50 Hz.

But if we see a bigger picture and consider whole Indian peninsula then the situation changes.

India is a country of extreme diversity- seasons, terrain, ethics, culture, and so many other factors, which result in highly dispersed loads, both in time and space dimension. To add to this the major energy resources are concentrated.

We have huge coal deposits in central and east India where one cannot find major load centres. The South India marks the electronics and heavy industries hub but has very limited power resources (majorly coastal and hydel). The North India, rich in Hydel power which sometimes meets the light demands in winter and monsoon and becomes a heavily deficit in hot summers as reservoirs dry up.

The following picture depicts the story: 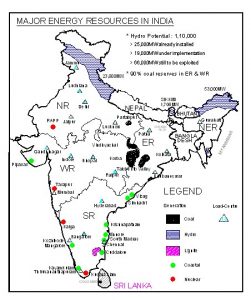 2. And now a rough view of major consumer location: 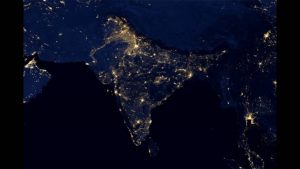 So we not just need a transmission system that is capable of transmitting power at a low resistive loss but a system of major arteries of electrical power that is also capable of transmitting power from regions of surplus power to power deficit regions considering the space and time diversity, not only this we want them to be highly reliable also.

All the qualities mentioned above are satisfactory if we introduce the concept of one grid, one nation.

India is divided into five regions, each having its own regional grid namely: 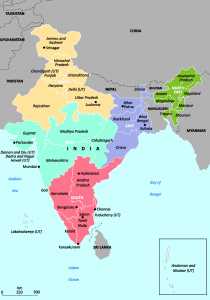 All the transmission lines end up at distribution substations from where power is transformed into a useable form, the 220 volt supply.

This whole system doesn’t come out in one night, here is an excerpt from the report of Power Grid Corporation India Limited, that describes the evolution of our national grid: 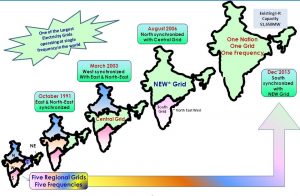 We have already noticed the transmission lines of 765 kV and HVDC links from the various mega power station in the western grid to head towards other grid’s states like Hyderabad (Southern), Agra & Orai (Northern), and Ranchi (Eastern).

This further interconnects various grid and we get a very large national grid in which power can be shared to increase the overall economy.

The following graphs indicate the inter-regional links: operating, under construction and proposed. 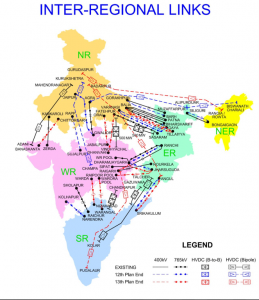 Good engineering must be complemented by good cooperation among the interconnected systems. This requires extensive data sharing, joint modelling, and clear communication, which pave ways for the hierarchical system of regulatory organisation which is called the LOAD DISPATCH CENTERS.

Thanks for your time.