The Renewable energy is showing a great ramp up in these early decades of 21st century era. The trends and prediction show a promising future for solar, wind, tidal etc. The solar energy harnessed in the form of solar photovoltaics and heat are boosting ever since the early 2000s, and in the year 2019 it shot to gigantic 25% growth rate and increasing. 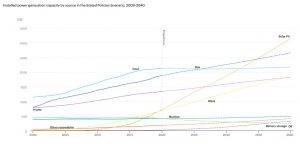 Note: A better-edited version of this blog is available in original MS Word format, link below:

Follow for an eminent IEA report “World Energy Outlook 2019” to know all about our planet’s current energy scenario:

The problem with renewables is not of power scale but of irregular availability. For example, in a single hour, the amount of power from the sun that strikes the Earth is more than the entire human race consumes in a year, a hurricane every second releases the energy equivalent of 10 atomic bombs but last only a few minutes or hours. 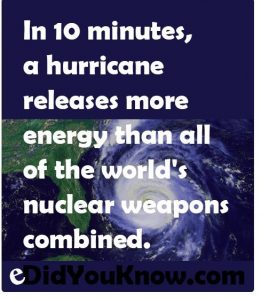 However, it an obvious fact that we couldn’t tap tiny fraction of these mighty energy resources due to present technology constraints, but nothing could be so soothing, to hear of energy availability at such minimal cost to our environment when climate scientist predicts of human race extinction due to fossil-fuel induced climate crisis.

The supply and demand cannot be achieved using renewables without proper engineering. Energy storage provides the only feasible solution to link the two. Storing when excess availability and delivering when demand exceeds generation.

Now the other face of story is that the modern power system is in transitional period, now DC power is again gaining ground on consumer side like the highly efficient BLDC motors, semiconductor applications like large database centers, home appliances, and jillion low power devices operating on DC. But still AC is major form of consumption and unfortunately major storage technologies (most importantly batteries) don’t store AC power directly.

And here comes the topic of the blog: The Inverter Circuits.

Under this project, team Aantarak aimed to look upon inverter technologies and tried to develop an insightful understanding of the operational principles of inverter circuits, with a vision to further improve the existing technology.

Suppose we have V Volts DC battery source and we want to power an AC load whose input is specified as f Hz.

How would you do that, think for a second.

To get an AC supply from a DC source, all we have to do is to interchange the supply terminal across the load at the required rate. So, for 1/2f  seconds we are giving +V, then zero and then -V for next 1/2f  seconds. 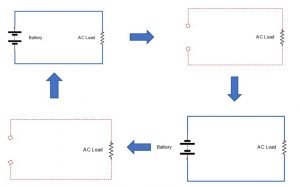 Well that is a square wave. 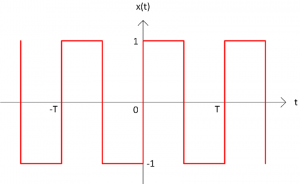 If you recall the mathematical treatment of waves shapes in previous blogs, the Fourier series expansion of this wave give the component waveforms.

Let square wave be represented as:

Fourier series expansion of the waveform is:

Graphically plotting (in the time domain) the components of a square wave: 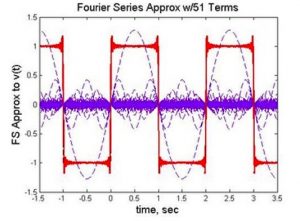 Plotting the components in the frequency domain:

But for now, we can say we have obtained a voltage waveform which has a sinusoidal component of f Hz in it along with its multiples.

We will look at implication of multiple frequency components later.

If we try to realize this physical interchanging of the terminals using some electrical/electronic device then we are half done for building an inverter circuit. 🙌🙌🙌

So, let us now use this concept to layout circuit basic idea using some imaginary god-switch which is capable of doing what we want here exactly.

Assume an electrical circuit that works in following manner: 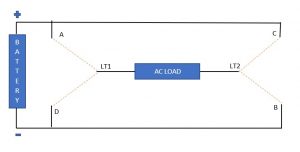 Between load terminals: LT1 and A & D and between LT2 and C & B we have a single pole double throw switch whose operational characteristics could satisfy following operations as described below.

So, for the first half time-period, load should be supplied by +ve voltage, for that:

Then for a very small-time instant voltage should across load must be zero.

For another half time-period, load should be supplied by -ve voltage, for that:

Now the vague principle of interchanging supply terminals to obtain an AC voltage waveform across a load using a constant voltage battery has become much clearer. Before we go on laying out exact switches required at the load terminals, we have to give a thought on the load current waveform too.

When the load is purely resistive- things are simple, the load current will follow the voltage linearly and the direction of current would be from A to B I positive cycle, zero current at t=t/2, and reverse direction in next half cycle.

When you search for switches with such characteristics, then the 21st century Doremon pocket’s hobbyist electronics store (Easy Electronics for SVNITians😅😅😅) will give you a BJT.

With proper base supply, we can obtain the desired characteristics. 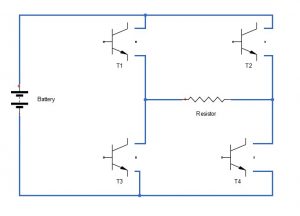 But when it comes to real-world, rarely you would find an AC load of unity power factor or we can say purely resistive load in another way.

Consider a case when the voltage across the load somehow obtained is sinusoidal, which will be obtained in advanced inverter circuits.

The load being inductive, will show the following characteristics.

As indicated in the graph at the onset of every -ve half-cycle due to lagging nature, load current won’t reverse its direction similarly for +ve cycle. The above circuitry would reverse the voltage across terminal but it would not be able to sustain the required load current of opposite polarity. This could be easily achieved if we connect a diode to conduct current in short time period at the starting of +ve or-ve voltage waveform.

So, the new circuit now becomes: 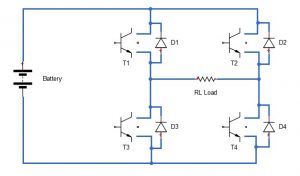 Let us try to analyze the circuit operating over one complete cycle. 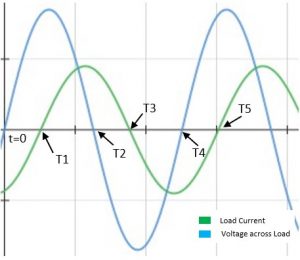 In the following table we have required states of transistor (T1, T2, T3 and T4) to obtain the AC waveform across the load and which diodes are conducting and not-conducting current during the particular time-period.

We can replace the transistor and diode combination by another power electronics device, called power MOSFET. The greatest advantage of using this device is its capability for conduction of current in both directions. Additionally, it gives more power handling and reliable operation. The device is known by name of IRF540. 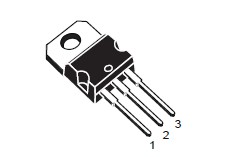 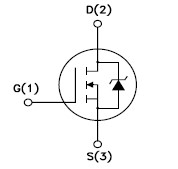 NOTE: The diode shown in the symbol is parasitic. To know more follow the notes or the datasheet of IRF540. 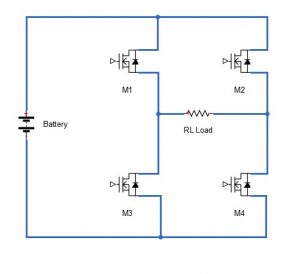 A generalized statement can be made that all the four switches are capable of conducting current in both directions during ON state.

Now let us have a glance on most important parameters of an IRF540 taken for datasheet:

The drain source breakdown voltage is 100V, while most of AC load operate on 230 V RMS voltage i.e. peak value of 325 V. So, this H- bridge configuration is modified for obtaining relatively higher AC peak voltage for low DC battery voltages. This is done by use of a three winding step-up transformer. 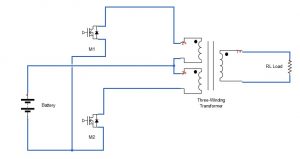 Since the MOSFETs can carry bidirectional current through the source and the drain terminal thus this circuit can ve used to power non-linear loads also.

The MOSFETs M1 and M2 should be turned ON and OFF alternatively for 10 ms each for obtaining an AC output voltage of 50 Hz frequency. Numerous IC can be used to design the triggering circuits like IC4047, IC4049, etc.

The output voltage wave obtained using the circuit drawn above is a square wave. The Harmonic content would be little more than required for optimal performance.

Using a minor modification to this circuit we can get a modified sine wave.