In the world with such a little space for tolerance, harsh and fierce words of people, lets us talk of brotherhood, humanity, compassion, and sympathy.

The feeling of being safe and secure is the most treasured thing a country can give to its countrymen. There are many lines along which the topic can be introduced in the blog. Being a serious writer I would start with a concerned and serious note.

Also, I would like you to read the whole piece of writing to avoid any misleading.

The world is following similar trends. If we look back, starting with 9/11, 13/11 to 26/11, from New Zealand’s Mosque attack to the latest 8 bombings on Churches in Sri Lanka and, the face of crime, threats and terror have turned ravage and the limit of barbarism and vulgarity have been crossed far-far away.

I can agree with you on the opinion that history has seen even more demolishing and barbaric human behaviour. But the question is of the present. What’s done is done nothing can change. But we can determine what happens to our future generation. Blaming the history is not going to affect us in any way but surely cogitating today, tomorrow can be made a little better than today.

Whatsoever, it seems so beautiful to me that it is human which commit such crimes and it is not the god but it is the human themselves who bring justice to the fellow victims. In this blog, we are going to talk optimistically about the institution and the group, the lifeline and proud of the nation, the Judicial System i.e. the Supreme Court of India.

The blog aim is to share information, spread awareness and also breed appreciation and respect for the judges and lawyers among the readers. I would also point out some of the critical issues and concerns of our judicial system.

Also, I would like to share various sources of inspiration for the blog. I was motivated by the 2014 and 2016 speeches of former Chief Justice of India T.S. Thakur, works of Justice Markandey Katju, reports and articles published on a website named daskhindia, the companion, prs legislative research, Wikipedia, etc. For statistical data, I have referred to the National Judicial Data grid (NJDG), e-courts and Dept of law and justice:

and other government verified sources.

If not them whom should we talk about. Not satisfied? Read till the end, I won’t need to answer it again.

The Supreme Court of India came into being on 28 January 1950. The first Chief Justice of India was H. J. Kania. The Supreme court is one of four pillars of Democracy and has a crucial role to play. The whole judiciary system of India had a fearless and unbiased history with very bold and appreciable justices: including the invalidation of candidature of Late Indira Gandhi G in 1975, 2G Spectrum case, recognition of transgender as the third gender in law, online ballot for NRIs, etc.

Throughout, the supreme court had played a major role in determining the course of the country after independence.

WHAT IS THE ISSUE THEN?

We are a country of 133.92 Million people. With as many as 10 religions, over a thousand communities which speak over 22 different scheduled languages on a landmass of 3.28 Million sq Km. Our country is amazingly diverse in terms of culture, religion and geography. We can never be tired, to take credit of being the biggest secular country on our earth.

For over decades since independence in 1947, this feeling of secularism and federalism have been nation binding forces and cause of our unity in diversity.

This survey report clearly speaks one thing very firmly that the common men have in themselves great secular feeling and the indifference of the religion is not the major cause of havoc. 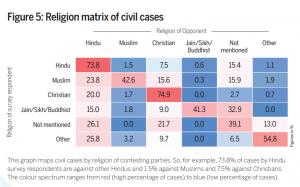 Now consider some other numbers and ratios: 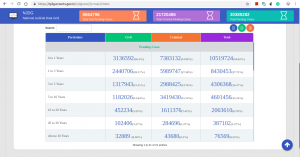 Above is a screenshot taken from the NJDG website which simply speaks tons of words about the condition of pending cases in all the courts (Supreme, high, and district courts), which sums up to 30.385 million cases closed in files waiting to be opened, heard and disposed off.

Now let us analyse more specifically. Considering the most spoken and heard quote about justice i.e. “JUSTICE DELAYED IS JUSTICE DENIED”, let us see how far this statement itself is justified in the context of Indian Judiciary.

Let us assume that we, the people of India are satisfied if we get justice in 3 years.

First for District and talukas courts: 40% of cases which account to a total of 3.087 million cases are 3- 30 years. Would it be fine for you to get justice for your loved one murdered after 3 years, illegally occupied your property after 5 years, etc? Of course not.

Now let us move to high courts if you not get satisfied by district courts. 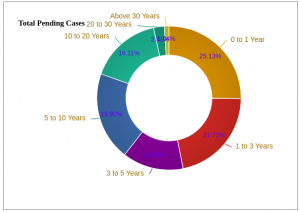 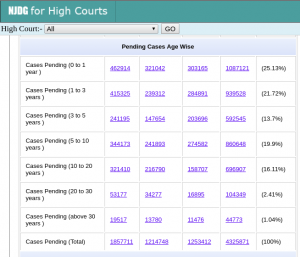 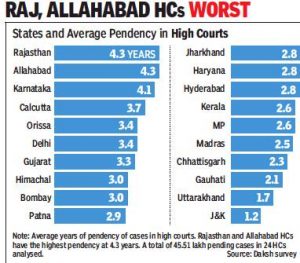 And finally, if you approach the Supreme court then you would be somewhere between 26- 80 years of age if you had started fighting at 20 years of age.

Sadly you wouldn’t be relieved even then. 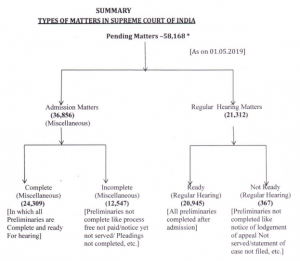 If you had filed your case on 1 May 2019, then your turn would come after the current 29 judges will pass judgement on 58,168 cases before yours.

Let us be optimist, you got justice from the Supreme court, but you would hardly be able to jump and scream out of joy, as you would have crossed your 40s.

Hey, don’t be stressed, have faith!!

WHERE THE HELL IS THE PROBLEM?

To blame for such a huge pendency of cases in various level courts of India greatly goes to one single fact. And it is the extreme shortage of judges at all levels.

Ideally, we would have been 50 judges per million and we are far short of figures.

How can we dream of becoming a superpower if our judiciary is so weak in comparison to other leading nations? 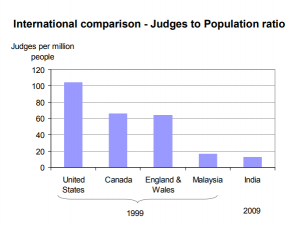 The graph displays the horrifying condition of the Indian judiciary. Well, you would say the data is of the year 2009. Unfortunately, “Nothing is Moving” said the former CJI TS Thakur. The graph shifts to 19 judges per million people in India in 2019 which in the year 2009 was 10.5.

Currently, 12% of the sanctioned strength of the Supreme Court is vacant. The corresponding figure for High Courts is 26%, and for Lower Courts, it is 18%. Among large High Courts, vacant positions in Allahabad HC amount to 45%, followed by 32% in Punjab and Haryana HC.

Here is the press release statement of Ministry of Law & Justice of 1 May 2019 of the vacancies: 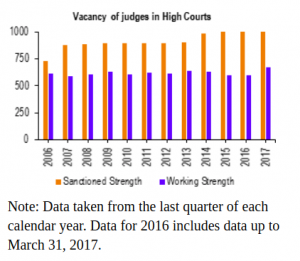 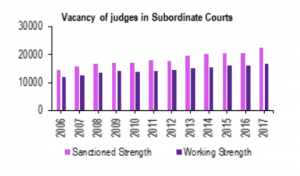 An Indian judge disposes-off nearly 2500 cases each year which is equivalent to 7 cases a day. A case file can range from 50 pages to 100 pages hence summing up to 525 pages a day which in our perspective (engineering student) is equivalent to preparing for two end-semester paper a day. We, students, consider it as hell week, and these judges follow this routine round the year.

This is insane, surely we are harassing them.

Even if it doesn’t chatter your teeth then either you have taken your end sem exam quiet lightly or you haven’t read what is written above.

WHAT IS THE WAY OUT?

It is very astounding to know that even at such an exponential rise of cases filed every day these handfuls no of judges are able to dispose of them as well as some of pending cases also.

Here is the report of their efforts:

In the past few years, we have seen the drop in the number of the pending case though marginally.

But at the cost of injustice to judges itself as no of increase in judges is still dangerously low.

There is no other way except to increase the number of judges for the sake of the welfare of victims as well as judges also.

Along with this, there are other contributing reasons also for the turmoil. Unawareness is also one of the issues. There are only a few students who dare to take streams other than science after they pass matriculation with flying colours and in this way a huge potential is diverted from delivering its service to the nation by giving justice to the people.

Parents don’t want to see their children pursuing a legal career because of impending danger and very poor and stressful environment.

At last the speech which provoked me, CJI T.S. Thakur speech excerpt:

“… It is not only in the name of a litigant or people languishing in jails but also in the name of development of the country, its progress that I beseech you to rise to the occasion and realise that it is not enough to criticise. You cannot shift the entire burden on the judiciary”.

What have you heard people saying in a typical Indian dispute?

“I will see you the court”.

It is not just a mere statement said when people are angry but more importantly signifies their faith on Judicial System of India.

The people of India have deep faith in its judicial system and on the judges and will continue to have it. But the point is, serious and immediate actions are required for the survival of both.

I know well very this blog is not going to lead any kind of impact or healing for the situation at the ground level yet I was unable to find a single reason to not write it.

The writer is always ready to take any claims of faulty data and takes responsibility for the same and would feel pleased if followed by a question or arguments.