WHAT WOULD YOU FIND?

WHY INSULATION SHOULD BE CONSIDERED?

NOTE: A BETTER EDITED VERSION OF THIS BLOG IS AVAILABLE IN ORIGINAL MS WORD FORMAT, LINK BELOW:

The generation, transmission, distribution and the consumption of electrical energy for the service of mankind is what in general the power system is supposed to do. If you had followed through the previous blogs in the electrical genre than it would be clear to you that in general, a power system comprises of sources of electricity i.e. the generators on one end and consumers of electricity like motors, heaters, and other appliances on another end, and between them is transmission and distribution system for efficient transfer of energy between components which are separated by huge physical distances.

The aim of this blog is to understand the physics of dielectrics, explore the insulation systems of the high-voltage lines, and the associated phenomenon like corona discharge with them. And thereby imparting light on some of the problems of high-voltage engineering.

Why insulators and dielectrics should be equally considered?

The advantages of utilising high- voltage are many. Decreased line loss, efficient conductor use and better voltage regulation are names of few. Modern system uses a blood pressure as high as 132 kV, 440 kV, 765 kV, 1100 kV and the limit is rising. Increasing the voltage will indeed get you some cool results but it also has another facet to it.

“INSULATORS: I DON’T WANT TO BE INSULATOR ANY MORE” 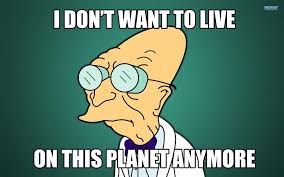 Yes at these extra high voltages the insulators and dielectrics begin to give up their jobs and the flow of electric energy is no more defined and our power system goes in vain if required engineering is not performed.

Understanding the science of the insulation is all about decoding the distribution of electric field around a conductor.

Consider a conductor of infinite length, having Q charge per unit length. The electric field will be radially outward or inward depending on the polarity of charge. The field of lines go till infinity where we have assumed potential to be zero. 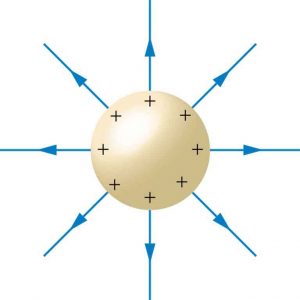 Plotting the electric field Vs the distance from the center of conductor: 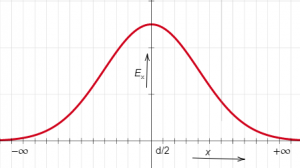 NOTE: The electric field inside the conductor is zero.

Now, the voltage V and the distance relation: 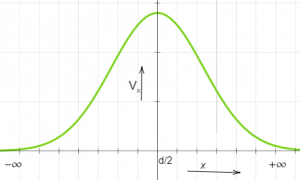 One more parameter is defined, the g, called the voltage gradient, mathematically its value is equal to the electric field and the unit is V per meter. From the expression, its maximum value occurs at the conductor surface always.

Let us check what happens when we fill the whole space with a dielectric of constant as εr2, keeping the Q on conductor value same: 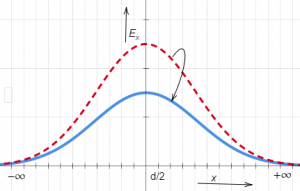 And the voltage becomes: 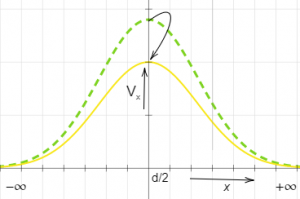 Conclusion 1: Keeping the charge and all parameters constant, for increasing value of εr  the magnitude of electric field and the voltage developed on conductor decreases. 🙄  WHAT?

An insulated conductor (the case of underground lines):

Now, let us see what happens when we reduce the dielectric material to some finite distance.

a.) Keeping the charge on conductor fixed:

In this case also the electric field will be radially outward or inward depending on the polarity of charge. But the field of lines will not go till infinity, it will terminate at the inner surface of insulator as we have grounded it (assumed potential to be zero). 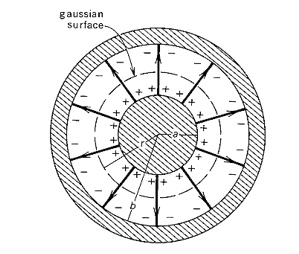 Again, plotting electric field (or g) Vs the distance from the center of conductor: 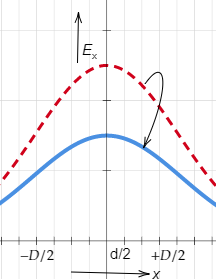 NOTE: Only finite termination of field at +D/2, magnitude remain same as for the infinite dielectric case.

Electric field and gmax remains same in magnitude but lesser than the first case. 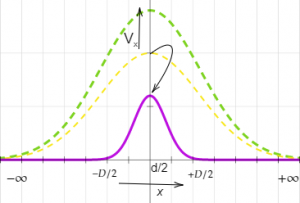 Followed from earlier cases, for different insulators (increasing εr), we will see decrease in both electric field and the voltage developed.

Conclusion 2: For same charge on conductor decreasing the depth of insulation will lead to decreased voltage at conductor. 🤷‍🤐

b.) Now let us keep the voltage fixed:

To keep voltage fixed, the charge redistribution on the conductor will take place, charge will increase proportionally as we increase epsilonr2,

Analysing the electric field equation, we can easily see that the magnitude of field will not change,

Conclusion: At constant conductor to earth voltage the electric field (and the gmax) in the dielectric is independent of the material itself.

2.Decreasing the insulation depth in this case is extremely important case to consider, keeping in mind the expression of voltage and field: 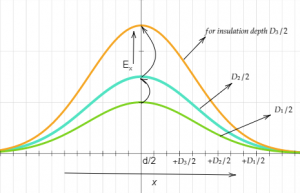 NOTE: The electric fields will be limited to respective insulation diameter. 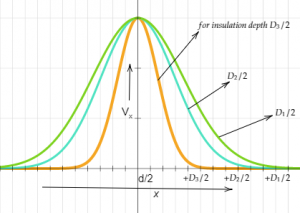 NOTE: Electric field is the gradient of voltage distribution, graph is in agreement of this also.

Conclusion 3: At constant V if we go decreasing the insulation depth than the electric field will go on increasing and eventually will exceed a threshold limit.

HOMEWORK: Calculate for yourself the effect of changing diameter of conductor (d) on parameters.

We will use all these conclusions later directly in designing insulation systems later in the blog.

Let’s have a revisit to the most general form of an electrical line.

Consider a pair of two infinitesimal small conductors at some potential and carrying some current. If we keep a paper in the plane perpendicular to the plane of conductors and sprinkle some iron fillings, we see a beautiful arrangement of fillings and we know they are along the magnetic lines of the system, as iron always align in the magnetic field. 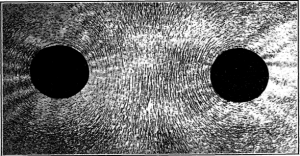 Now suppose the conductors are only energised not carrying any current and the same experiment is repeated again with mica dust. What would we see?

Begin a dielectric material, the orientation of dust is different and they align along the electric lines of force of the system. 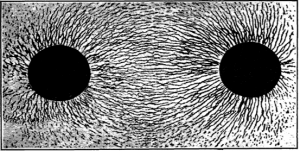 So whenever the power is being transmitted both of the fields are present and this fate of power transmission cannot be achieved if any of them is absent.

Across the whole length of transmission and distribution line, some energy is stored in two forms the electromagnetic and electrostatic field. 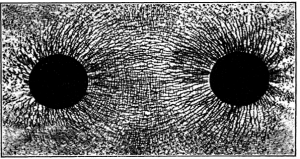 The behaviour and dynamics of these two fields can be studied using magnetic circuits and dielectric circuits respectively.

Let us go little off-topic to explore the magnetic circuits and dielectric circuits:

(WARNING: This goes far off-topic you can revisit this section later)

//THIS PARTICULAR SECTION IS UNDER-DEVELOPMENT

These two circuits have striking similarities between them. 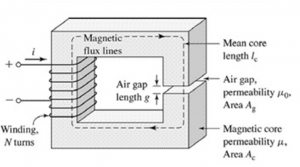 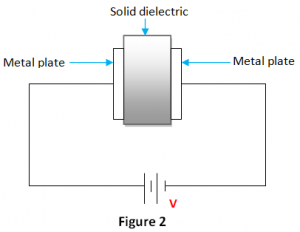 Even if we don’t understand the field dynamics wholly still, we can at least attempt to apply our previous knowledge of the electric field and voltage distribution for two parallel conductors: 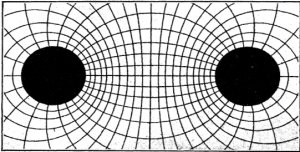 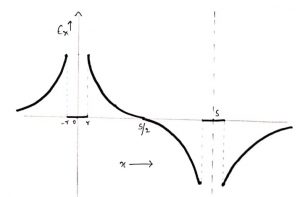 Votage distribution: Assuming zero potential at S/2 plane. If voltage between +ve wire came out to be V (from reference plane) then the voltage between conductor will be 2V. 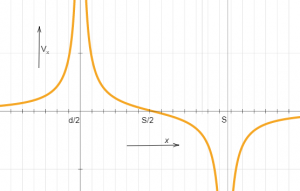 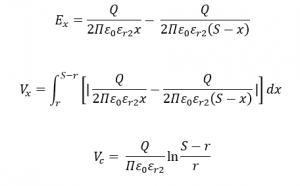 r being very small compared to S, so-

Substituting the value of Q:

Potential gradient is maximum at the surface:

NOTE: It is worth remembering IMP formula.

WHAT IS A BREAKDOWN?

The flux density which is dielectric flux per unit area when exceeds a limit the insulation or the dielectric material also starts conducting and electrical energy is wasted, this point is called the breakdown or puncturing of the dielectric or insulation.

Each material has its own limit of withstanding high-voltage without getting punctured. The strength of insulation is generally expressed in terms of gradient rather than flux density.

Here also the dielectric system could be understood by taking the actual mechanical system as an analogy.

Whenever a material is loaded with some force there is deformation, the energy gets stored in material, and these characteristics are represented by the elasticity of the material. Each material has is the ultimate strength after which it breakdown.

Similarly, the potential gradient might be thought of as the force then the flux density as resulting electrical strain, and here permittivity is the electrical elasticity. The energy is stored with increasing force and is given back with decreasing voltage. Rupture occurs when a unit force exceeds the limit.

This concept can be used to easily understand why a highly permeable material when taken in series with a low permittivity material the later one gets ruptured first. As in the mechanical system, the stiffer material (lower elasticity) takes up the major stress and breakdown first.

Breakdown in air i.e. Corona will be explored in detail in next blog.

Sometimes it isn’t enough to just read about it, you have to interact with it! And that’s exactly what you do when you use one of blogs of CEV!!!

You can involve in a technical discussion with our electrical folks:

You can drop some suggestion for improvement, and contribute by sharing your wisdom on following two questions for developing the #Analogies Section.